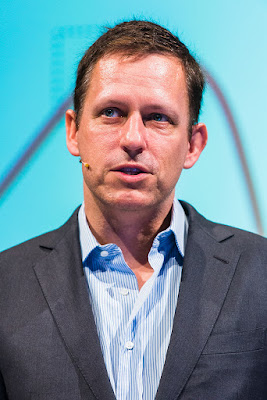 I've remarked in the past that offbeat billionaire Peter Thiel has been funding causes that were dear to Robert Anton Wilson's heart, including intelligence increase, life extension and space travel. But I've had no opportunity to interview Thiel — until now. Maybe.

Thiel surprised me by becoming a Trump delegate in the Republican convention, and a further surprise was the announcement this week that he will be one of the speakers at the convention.

I'm helping to cover the convention (for my newspaper in Sandusky) although I don't have press credentials to actually get inside the convention — I'll be attending events and meetings and protests outside of the hall. The Republican Party has sent out a form allowing journalists to request interviews with the speakers. I've asked for Thiel.

I have no idea whether I'll snag an interview. If I do, I'll mostly have to ask about his support for Trump, how that squares with his previously-expressed disdain for politics, etc. But I also will ask about Robert Anton Wilson and his ideas.

Be sure to bring along any open carry guns you may have to prove that you're a patriot.

Any luck talking to Peter? I heard a short piece on him today on npr.