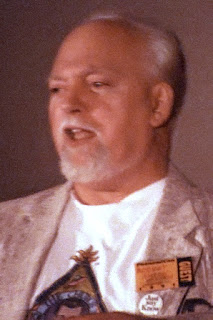 Eric Wagner, author of An Insider's Guide to Robert Anton Wilson, sent me the following email, posted by RAW to his email list:

I may yet recover but it doesn't look like it.
Cheer up - the World is full of Wonder.

"Most people are as happy as they decide to be."
--Abraham Lincoln

I've had a good life - "a fucking incredible life" my daughter says,
and I have no regrets.

I forgive everybody who has ever hurt me, and I ask forgiveness of all I have ever hurt.

As this was sent out several months before Wilson actually died, I asked Eric for some context. He explained, "Bob had gotten kicked out of hospice for surviving too long. His health had declined for years. I think you friended a guy on Facebook who helped take care of him.  Bob hated staying at the hospital."

You can read some of RAW's last blog posts.

1.
Well what do you know?
Another day had passed
and I'm still not not.

I think Eddie Nix took care of Bob. I blanked on his name when I emailed you.

Eric, you and I have some of the same old emails from Bob and friends. I don't think Val would mind if I pasted in the email she wrote to Paul Krassner in response to that June 18, 2006 email from Bob. Maybe you got this. Paul sent a copy of Val's email out in an email to Bob's friends, also on June 18, 2006:

~~~~~~~~~~~~
Dear Paul,
I have been told by Christina, Alex and Graham that Bob is dying. Though I have an appointment with him and my pal the good doctor on Wednesday morining when I return to town. These are words from the wonder of a friend that we are fortunate to have Bob.
You know that the Zen monks/poets write a koan on their death beds, it is not allowed that they rehearse prior to the moment of death...when Bob and I wre talking about this one night we both simoultaneously said, "better get started..." Well needless to say Bob's koans are purely unrehearsed and present at this moment... as he faces death with grace, humor and a smile on his face. As we have been reading to him he has been looking so absolutely beautiful.
This appears to be the way... with humor and maybe logic..
Love to you and to Nancy.
May our brother journey well.
All that enriches, val
~~~~~~~~~~~~

Rasa, I think you archived your email better than I did. Hard to believe Bob passed almost ten years ago.