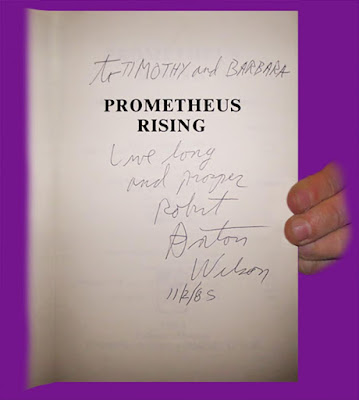 Richard Rasa, the metaprogramming director  of the Robert Anton Wilson Trust, has just posted the above photo on the Cosmic Trigger 1 page at the Hilaritas Press website. As you can see, it's a copy of Prometheus Rising autographed to Timothy Leary and his wife. (As I've mentioned before, Hilaritas has just put out a new authorized edition of the book, in paperback and as an ebook.)

There's a story behind the photo. Mr. Rasa explains,

"In 2012 I was working on a Timothy Leary project in the Leary Estate's preparation for updating their Futique Trust identity. We had a meeting at Bruce Damer’s place at Ancient Oaks, where he has in his Digibarn, a segment of the Leary Archives that never made it to The New York Public Library. The Leary Estate asked Bruce to catalog it and keep it in his Digibarn, which also holds his astounding collection of early computers. The Leary archive material is a lot of stuff NYPL probably would not have wanted, like his personal books, tapes, records, etc. including his living room chandelier that Bruce is holding in the photo below. While we were roaming around in the archives I found Tim’s copy of Prometheus Rising that had been given to him by Bob. I snapped a photo of the inscription. That’s David Jay Brown’s fingers holding the book." 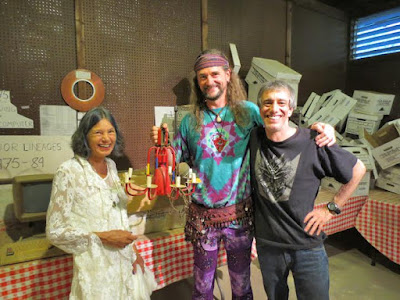 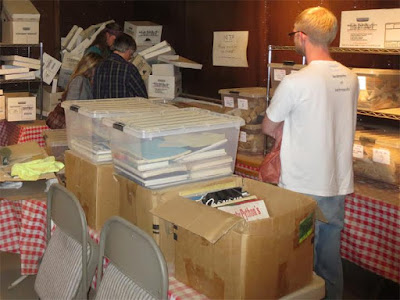 Timothy Leary material in the Digibarn

I want to visit the Digibarn. More about it here. 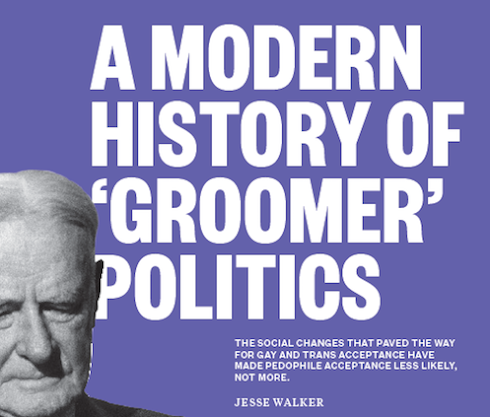