Michael Johnson on why Korzybski has faded 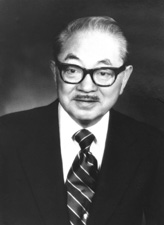 In his post about John Barth (mentioned Tuesday on this blog), Arthur Hlavaty wrote that while a Barth revival may never happen, "I, however, am loyal to many of the dead fads I once followed (General Semantics, Games People Play) ... "

Alfred Korzybski's General Semantics is indeed not the force that it once was, and at Overweening Generalist, Michael Johnson speculates on why the thinker who was a big influence on Robert Anton Wilson, Robert Heinlein and others appears to have faded, in the post, "Why Korzybski Waned: Some Educated Guesses."

I've never read any books about General Semantics. If I'm reading Michael correctly,  S. I. Hayakawa's Language in Thought and Action wouldn't be a bad place to start. Michael says it is "a delightful read" and explains the RAW connection to Hayakawa.
on June 09, 2016

I see that Stuart Chase's The Tyranny of Words, which along with Hayakawa's book helped me assimilate Korzybski back in the day, has been reissued in a new, and even Kindle, edition http://tinyurl.com/hywqbzq

I found Korzybski unreadable but got a lot from Hayakawa and other popularizers.