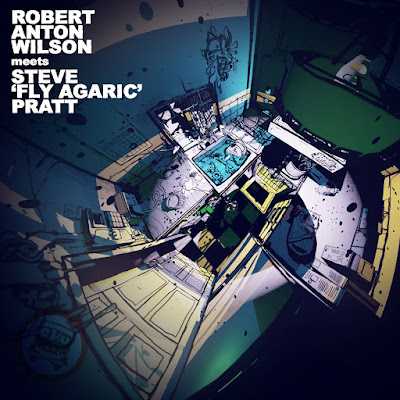 A followup to my June 16 post about the new album,  Robert Anton Wilson Meets Steve 'Fly Agaric' Pratt, which combines Steve's interview with RAW with music by Steve and his musician friends: It is now available for download from the usual outlets. I bought my copy today from Amazon digital music, but I also checked and found it on iTunes.

I did not pay sufficient attention to the release date, which was actually June 23, in the future when I wrote this nonsense sentence on June 16: "(It was released on June 23 but I did not know of it until I saw a Tweet yesterday from Steve)." Of course, Steve was promoting an album that had yet to be released but I somehow managed to not grasp that. I apologize to Steve for my confusion and hope he will say "it's OK, mate" in that charming English accent he unleashes on his new release.

Anyway, congratulations to Steve on his new release, which I was able to purchase on Amazon for only $5.99 — two cups of fancy coffee, at least here in the states. As I wrote in an earlier post, the album combines Steve's interview with RAW with music by Steve and other musicians.

P.S. You can also buy it as a physical object audio CD at the usual outlets, too. I just ran a search on Amazon and verified that.
on June 24, 2016