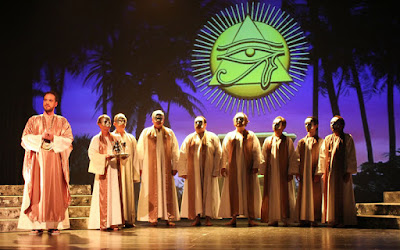 Scene from The Magic Flute by artist and designer J. Matthew Root. (Source).

While I tend to think of Beethoven as Robert Anton Wilson's favorite composer, there's no doubt he loved many others, including Wolfgang Amadeus Mozart. Mozart appears as a character in the "Historical Illuminatus" books. In the piece "Credo," included in Right Where You Are Sitting Now, Wilson writes, "I believe in Bach, the creator of heaven and earth, and in Mozart, his only begotten son, and in Beethoven the mediator and comforter; and inasmuch as their gods have manifested also in Vivaldi and Ravel and Stravinsky and many another, I  believe in the communion of saints, the forgiveness of error and mind everlasting."

In his book Listen to This, music critic Alex Ross writes about how he decided to listen to every note of Mozart music available, transferring a 180-CD collection of complete Mozart issued by the Phillips record label to his iPod. Listening to the whole thing took Ross three months. He concedes that airport public address announcements and the like were a distraction.


I am not as ambitious as Ross, but I have listened to Mozart for decades. The kind of folks who read this blog will likely be interested in his opera, The Magic Flute, but lately I have been concentrating on the solo piano music — I like solo piano.

There are so many ways to listen. I am a big fan of the Hoopla library service, and I've been listening to Alfred Brendel's generally reliable Mozart recordings. (Hoopla does not have everything, but it does have an enormous music library to stream to your phone or tablet or whatever, and it also has movies, TV shows, ebooks, comic books and audiobooks. Check and see if you library has it, or if you can get a library card that provides access to it.)

I've also been listening (via Amazon's digital music service) to a VoxBox complete Mozart solo piano collection by Walter Klien, which I bought for 99 cents in February. It was a great bargain, although the price has now been raised to $9.49. The Wikipedia biography of Klien says, "He was much admired for his crystalline tone and projection of detail in his interpretations. His clarity of playing suited the music of Mozart and Schubert in particular." Although Klien's versions are reliably pretty, he can also bring power when he needs to.

The Big Mozart Box from the Bach Guild, which includes some of the more crucial piano pieces, is available on Amazon digital music for $2.99. There is also a Big Mozart Piano Sonatas for 99 cents, played by Jeffrey Biegel, that's just 99 cents. I can't comment on it because I just discovered it (and bought it).

I loved reading about Stendhal's love of Mozart in Memoirs of an Egoist.