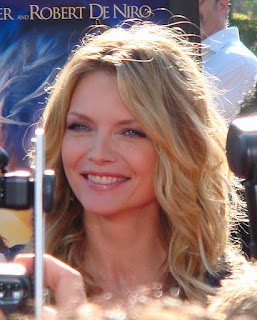 I have a question from a reader, which I'm sharing because I haven't found anyone so far who can answer it.

Greg Carden asks, "I have been a huge fan of RAW since about 1989 CE or so, his writings & performances have vastly shaped my reality tunnels (after largely demolishing the previous one).

"Anyway, I have been trying to track down a reference Mr. Wilson made, I believe in an interview. As I recall, he said that his ideal image of Eris was Michelle Pfeiffer.

"I have scoured my books, I know I read it somewhere, but so far to no avail. I've asked all my friends who are also RAW fans, but no one knows where he (may have) said this. It's not important at all, I just wanted to reference the line in a small project I'm thinking about doing - it's mostly now a matter of losing sleep while racking my brain, searching out every RAW interview I can find online to search, and a bit of OCD."

Intriguingly, Richard Rasa notes, "I do know that Michelle Pfeiffer provided the voice of Eris in Sinbad: Legend of the Seven Seas. But maybe someone in casting was inspired by Bob’s statement."
on June 10, 2016

Thanks for the help! I actually discovered the Sinbad movie with Eris voiced by Michelle Pfeiffer when I tried to find RAW's quote online - googling "Robert Anton Wilson Eris and Michelle Pfeiffer" brings the movie up (no reference to Wilson's comment, of course). Bit of a synchronicity, serendipity at least - how that film did not register on my radar, I don't know! Granted, it was a flop (Brad Pitt as the voice of Sinbad?!?), maybe that's why. I read that Pfeiffer almost didn't do the part (her kids urged her to), it took three rewrites of the Eris character before she felt it was okay. There was apparently a movie poster with just the Eris character on it, emblazoned with the words "Michelle Pfeiffer is Eris" at the top. It would look great on my altering altar of idle worship…

Thanks again for the help!