[Today's guest post is by Eric Wagner, author of An Insider's Guide to Robert Anton Wilson, an English teacher in the Los Angeles area and, like Wilson, a James Joyce devotee and general lover of literature. -- The Management.] 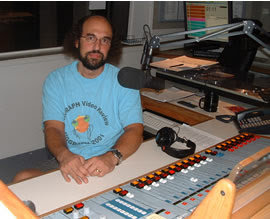 When I first started reading this wonderful novel, I wondered whether Mr. Smolin would reference the Miranda in Shakespeare’s Tempest. He did, of course, in the first three pages, but more importantly he also referred to Proust. One can see this whole novel (and perhaps the whole trilogy) as a massive Proustean memory. The novel begins in 1979 where the protagonist has just finished his first year of college. He then recollects his interactions with the admired Miranda from 1972 to 1976. The recollections seem largely realistic and/or accurate, except for the tendency of many of the characters to misremember the name of a character in Charlie and the Chocolate Factory. This phildickian memory flaw suggests the 1979 consciousness of the narrator may have reshaped some events of the narrative. Also, the failing mental health of his next door neighbor may have warped some aspects of the reality of the novel.

When I moved to Southern California in 1998 I found myself spinning the radio dial while traveling our lovely freeways. On Sunday nights I kept coming across this cool DJ with a Grateful Dead show. Now, I had grown up in the San Francisco Bay Area, so while not yet a Deadhead, I had absorbed a certain amount of Dead culture. Well, I starting making a point of listening to the show on Sunday nights and found myself becoming more and more fascinated by the Dead and by the DJ, Mr. Barry Smolin. The show also featured contemporary jam bands and “miscellaneous psychedelia”. Barry introduced me to a ton of great music and made me fall in love with rock and roll again. I remember one night he played The Madcap Laughs by Syd Barrett. It seemed like just the right music at just the right time for me. The Miranda Complex uses music to establish the soundscape of the seventies as well as the consciousnesses of the characters. I found myself thinking of Syd Barrett and wondering if the next door neighbor’s mental illness might shape the novel.

Speaking of mental illness (ha, ha, ha), I find myself writing this while listening to Mr Smolin and Double Nought Spy Car’s contribution to the Waywards and Meansigns second Finnegans Wake Project. What great stuff! I highly recommend you check out both Barry’s novel and music.
Bloomsday, 2016

P.S. The Madcap Laughs includes a song with lyrics by James Joyce. Perhaps I exist in the novel too, insanely obsessed with Pink Floyd and the Wake. Man, this recording of the Wake rocks!