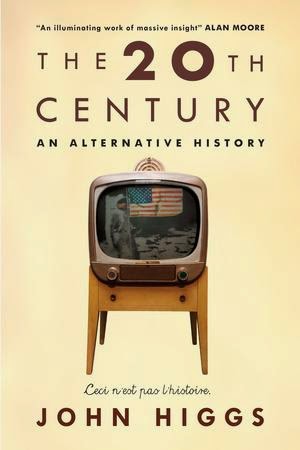 Cover of the new John Higgs book, which comes out in April 2015.

Looking back on 2014, I would say the biggest news in the world of people interested in Robert Anton Wilson would be the production of the Cosmic Trigger play. In itself the play helped focus attention on Wilson, but it also produced many spinoff projects, such as the new John Higgs book and the new class that showed that Maybe Logic University is still breathing, after all.  Steve Pratt relaunched RAW360. There were probably other spinoffs I'm not thinking of. Congratulations to Daisy Eris Campbell for pulling it off.

Second place I would give to Adam Gorightly, who published two important books in 2014: Historia Discordia, which came out on May 23 and provided many important Discordian documents, including some quoted in Illuminatus!, and Caught in the Crossfire, a new book on Kerry Thornley and the JFK assassination investigation. Adam technically launched his Historia Discordia website in 2013, but published a huge amount of material on it in 2014. It's not just a quickie promo site for the book; it's an important source of information about Discordianism.

There were other developments in 2014. I began a series of posts on Illuminatus! in February, devoted to every 10 pages or so. Between my efforts and everyone who helped (including comments from many of you, a guest post by Oz Fritz and number of separate posts by Adam Gorightly), I believe we've uncovered quite a bit for future Illuminatus! scholars.  My sincere thanks to everyone who has taken part and posted a comment or two so far.

UPDATE: Jake Shannon points out that he published a book and formed Discordian Libertarians. Well, I did mention that there were other developments in 2014! Apologies to everyone I missed -- I had to work today and had limited time.

One bit of important non-news: 2014 was another quiet year for the Robert Anton Wilson estate, which did nothing to make his papers available or to make his work easier for readers to find.

I'll offer one prediction for 2015. John Higgs will be coming out with a major new book: The 20th Century, an Alternative History. If the book does well, as I hope and expect for one of my favorite authors, it should focus attention on John's backlist and draw more attention to Robert Anton Wilson.