Robert Heinlein and 'Stranger in a Strange Land' 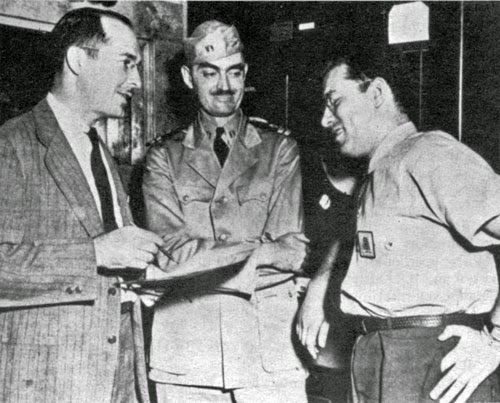 Robert Heinlein, left, with L. Sprague de Camp and Isaac Asimov at the Philadelphia Navy Yard in 1944. I began reading all three authors as a teenager.

At this week's Illuminatus! reading group entry, Christian Greer writes in the comments about the game that George Dorn and the others play to guess who the "Martian" is.

Christian asks, "It seems clear to me that Jesus and Emperor Norton were figures who refused to be incorporated into the state and ended up (in their own life times) as creating a new realty for themselves. How does George's incomprehension of this out him as 'the Martian'?"

Perhaps one inspiration for the "Martian" game might have been the book character who was, at the time, arguably the most famous "Martian" in popular culture.

"Once upon a time when the world was young there was a Martian named Smith," begins Robert Heinlein's Stranger in the Strange Land. "Valentine Michael Smith was as real as taxes but he was a race as one."

Smith was human had become a Martian when he grew up on Mars. He was certainly a person who created his own reality for himself and others.

The Wikipedia article on the book says it was so controversial that it was excluded from school reading lists. I actually read it in high school as an assigned novel in my senior year. The book, published in 1961 escaped the science fiction "ghetto" and became a very popular novel in the 1960s, particularly among the counterculture.

Robert Anton Wilson was certainly a huge Heinlein fan. See, for example, the New Libertarian Notes interview. "Heinlein has been an idol to me for more than 20 years. He can do no wrong, no matter how much he loves wars and hates pacifists," Wilson says.

Robert Shea was probably more of a science fiction fan than Wilson, and he certainly knew Heinlein. His son remembers, "Like most authors, he read all the time. He loved his routines. After writing over a long day he'd sit back in our living room in a big chair and read whatever book struck his fancy. I remember seeing the racy cover of FRIDAY by Heinlein and even Robert Jordan's EYE OF THE WORLD in his hand. I only remember those because of how the covers of them struck me."

Nice post. Bob once said to me he considered Heinlein the first science fiction author to incorporate sociology into his work.

Heinlein really shaped me. I considered him my favorite author from age 14 to about 21 when Bob Wilson replaced him. I read all the books he published during his lifetime, but I haven't read all the posthumous ones.

As I've probably said here before, Stranger and Illuminatus! are the two books that probably did most to Make Me What I Am Today.

Arthur, is the long version of the book better than the one I read so many years ago?

Mostly, no. Heinlein's method was to write wordy first drafts and then go through them with a red pen, crossing things out. A comparison of the two versions indicates how good he was at that sort of self-editing. (Would that he had been healthy enough to do the same with I Will Fear No Evil.) There are some witticisms and minor amusements that were cut, but basically the originally published version is better.

It is common to see Wilson and Shea's Illuminatus! trilogy labeled 'SF'. I am inclined to agree with this categorization on account of the trilogy's investment in many of the ideas that were hotly debated (and sometimes endorsed) in that literary 'ghetto' like General Semantics, libertarianism, etc. Furthermore, the label fits on account of its authors' personal investment in the genre.

Though, I wonder how out of place Illuminatus! may have seemed when it came out. It does not remind me of New Wave writers like Ballard, Le Guin, or Moorecock, or popular SF like Herbert's Dune. It seems to me that it much have filled a counter-cultural niche in SF as it existed at that time. Perhaps in line with Stranger, and Aldiss' Barefoot in the Head...

In response to the question of the origins/purpose of the Martian game: I reckon Tom was close with Stranger, but we could get even closer to the basis of the game if we looked at Campbell's 'Who Goes There?'

The story revolves around a deadly game of who is the 'Martian'...