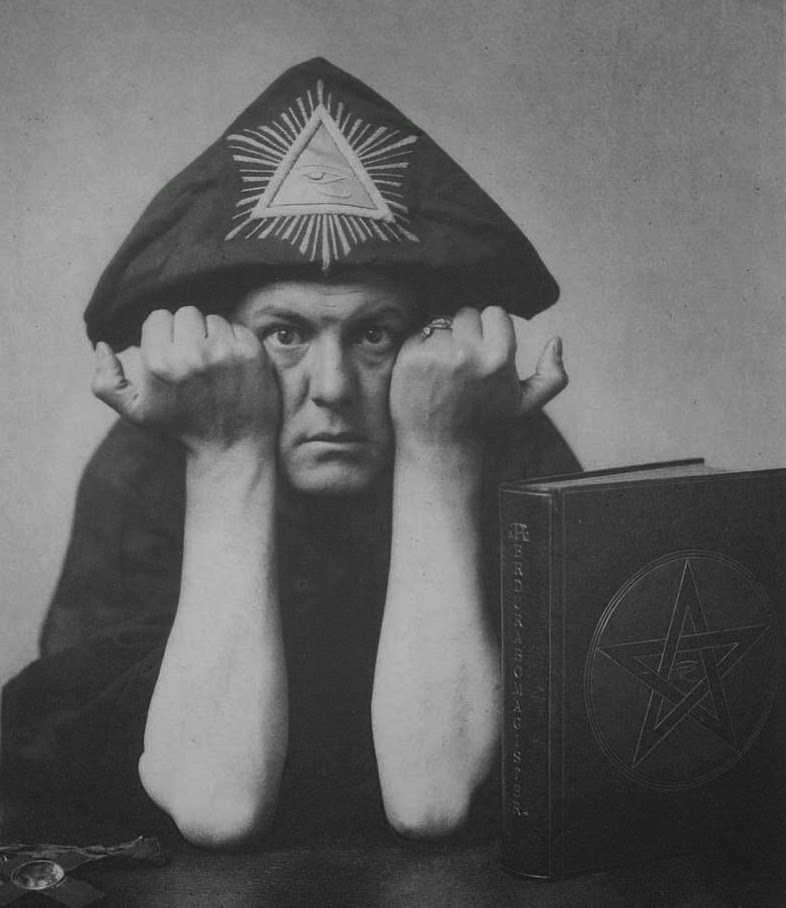 Sean Gabb has reprinted a piece he wrote about the famous British occultist Aleister Crowley, and I found it amusing reading, although perhaps Crowley fans will be less pleased. Sean finds Crowley "less interesting than those who think him interesting," and find few signs that Crowley's occult abilities actually did Crowley much good. Sean writes, "He quickly ran through the fortune his parents had left him. He spent his last years in poverty. Long before he died, he had begun to resemble the mug shot of a child murderer." Well, Crowley wouldn't be the first writer who "spent his last days in poverty." Perhaps there are other measurements of success.

In any event, Sean turns from Crowley himself, arguing that there are two main strands in the opposition to the New World Order." One group, Sean says, believes in going back "to the pre-modern sources of wisdom – whether these are religious or ethnic, or frankly mystical." The other group consists of scientific rationalists, and that is the group in which Sean counts himself: "I believe that most philosophical and political wisdom is to be found in Epicurus, Sextus Empiricus, Bacon, Locke, Berkeley, Hume, John Stuart Mill, and the others of their kind. There are valuable insights beyond this progression. But these are the writers who asked the questions that matter."

If there really are such two distinct groups, then I guess that I, like Sean, fall into the second one. But it seems to me that Robert Anton Wilson was a member of both groups. On the one hand, he was something of a mystic, if an agnostic one, and certainly found more in the writings of Aleister Crowley than Sean finds. But on the other hand, Wilson was certainly something of a John Stuart Mill sort of libertarian; his political writings seem to fall into that tradition. (And perhaps it would be misleading to just assume that anyone interested in Crowley would be a mystic in the usual meaning of the term; RAW seemed to be interested in magick as a form of neuroprogramming and thought astrology was bullshit.)

But perhaps Sean has hit on something. Many of the magick fans among RAW's readers do not seem interested in libertarianism, while many of the libertarians who like RAW are not particularly interested in magick. Perhaps only a minority of RAW fans have a deep interest in both? Or am I giving short shrift to the fact that many RAW fans are interested in magick AND support civil liberties? RAW had so many interests that it cannot be expected that everyone who is, say, interested in James Joyce will also be fascinated by Beethoven, or by the theories of quantum mechanics. Well, read Sean's piece and see what you think.
on January 24, 2015

I have the feeling that Illuminatus! appealed to many different interests, and running the Golden APA confirmed it. For me it started out as sexndope, conspiracy, and libertarianism, and now it's more ontology. Magick in general and Crowley in particular appealed to some, and some enjoyed it as Lovecraftian horror. And more.

I can vouch for being interested in both. For all I might disagree, I can credit Sean Gabb and the LA for getting me interested in libertarianism in the first place, before RAW and the rabbit hole he led me into since.. So yeah, thanks for that ;)

This isn't a mindless thrashing of scientific materialism - I'm writing this on a product of it. But I do think that we're reaching the limitations of the model, especially when applied to humanity.

Before materialism, we believed that everything, from mental illness to social upheaval to the weather was a manifestation of a divine being. Likewise, now our dominant models of social, political and psychological science seem to be based in scientific materialism.

It’s telling that some of our most valuable contributions to libertarian / non authoritarian ideas came mainly from the 18th and 19th century, when scientific materialism was still in its infancy, but the west had freed itself from monotheistic models. The US constitution, Stirner, Tucker, Nietzsche et al.

For me, the most obvious example of this is in Skinnerian psychology - a psychology based on little more than machine consciousness and input/output models of behaviour.

Indeed, I would posit that this is the dominant model of political and economic consciousness today. Our political systems care so little about liberty because they have absolutely no concept of it - freedom and happiness are abstract and subjective.

They are incapable of fitting into a computer simulation or a workplace study. As a result, they're discarded.

With our recent tremendous advances in computer technology, where does this leave us? I think it leaves us with an Amazon Warehouse model of humanity. Targets are set for productivity and we are to achieve them, and efficiency and productivity our our gods.

This for me explains a lot, from authoritarian lifestyle puritanism (smoking does not compute), to the increasing pressures of the workplace, to vast systematic income inequality and the liberty sapping panopticon that is being erected around us.

Instead of sentient beings, our models treat us as the sum of our possible productivity.

We’re all familiar with the dystopia, where a human being wakes up to a nutritious gruel, goes to a meaningless, automated, dehumanising job, goes home, eats more gruel, then sleeps, all under the watchful eye of the local panopticon. It seems to me that our main building block for that future is Skinnerian machine consciousness and computer modelling. The logical endpoint, if you like, of scientific materialism as applied to human beings.

When I read RAW or Leary, I think they saw scientific materialism for what I believe it should be - a useful model that has brought us incredible technology and solved many problems, but not a high tide mark for humanity and consciousness. We cannot really explain the miracle of Fatima yet, nor UFOs or other Fortean phenomena.

Space, Leary implied, isn’t just a leap in technology, its a leap in everything, including freedom and autonomy. I think Crowley, McKenna and other spiritually minded explorers make valuable contributions to whatever our next steps might be.

Or perhaps not, who knows?

There is some additional political context to Gabb's comments. The Crowley book was edited by this guy.

I suspect most people interested in Crowley get attracted by his ideas about individual rights and liberty rather than his mysticism of magick.

Sean Gabb communicates nothing about Crowley beyond his own personal bias. I find it comical that he passes sweeping critical judgement without ever having bothered to read anything by Crowley. RAW once said that people don't get Crowley because they don't try his exercises. How much more so when they don't even read his books?

He also appears to not know the meaning of the word "occult" when he writes:

"Turning to practitioners of the occult, I see no evidence of special success."

Occult means hidden. The sentence could read, "Turning to practitioners of the hidden, I see no evidence of special success." Why would anyone expect to see anything if it's hidden?

Mr. Gabb equates occult success with getting rich and being able to fuck better. He might have a different opinion if he bothered to read Crowley. However, maybe he's right. Evidence of that kind of success appears easy to find.

Jimmy Page is one of the better known fans of Crowley. It seems safe to call him an occult practitioner. He started a band called Led Zeppelin that had a bit of success, made some money. At age 71 he lives with his girlfriend who is 25, gorgeous, and ironically is named Scarlett.

there's a typo, first sentence should read "mysticism or magick."

I hesitate to say too much in the comments as I have not really read Crowley -- like Dr. Gabb, I know Crowley mostly from quotations. But I can't resist a couple of comments anyway.

If the issue is whether "Mr. Gabb equates occult success with getting rich and being able to fuck better," then surely Oz and Sean are both offering rather small sample sizes. Yet Oz is surely correct that Sean can't fairly generalize from one or two examples.

And if Oz is correct that "I suspect most people interested in Crowley get attracted by his ideas about individual rights and liberty rather than his mysticism of magick," then I do really need to read Crowley.

I've read quite a bit of Crowley (as has Oz) and know a number of people who consider
themselves followers of Crowley, and every one of them is interested in Crowley primarily because of his magickcal writings. I've also read a few works by some of Crowley's disciples including Parsons who call themselves Thelemites and who claim to practice a religion founded by Crowley. Certainly they seem wedded to a rather ayn randian worldview. But I wonder how anyone would conclude that "most people interested in Crowley get attracted by his ideas about individual rights and liberty rather than his mysticism or magick." Has there been a large survey done by someone somewhere? I'd like to see it.

fyreflye, as I wrote re liberty vs magick it is a suspicion I have not a conclusion. That suspicion is not scientifically based, I know of no such survey. It is based on a spending a few years watching and participating in the forums at lashtal.com, perhaps the primary AC website. Most people there didn't seem to have mysticism or magick as their motivation for being interested in AC though some people certainly were. It's been some years since I hung out there and I'm very happy to be wrong if that's the case.

I would add that it seems far more people read and appreciate Crowley than become followers of his, again just an opinion.