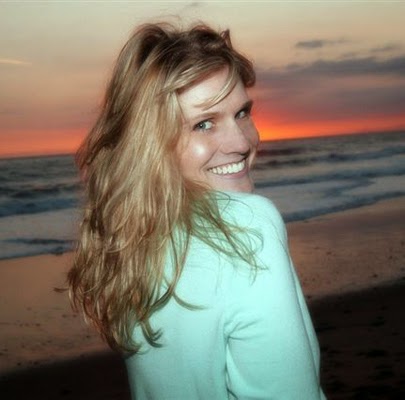 Winifred Adams, dressed in white and showing off her long blonde hair.

Thursday during my long drive home from work I listened to the podcast interview with Oz Fritz that Oz mentions in his most recent blog post.  I've mentioned Oz quite a few times in this blog, including a recent post where I mention that Oz recommends keeping a journal of dreams of synchronicities.

During the podcast,  he's interviewed by Winifred Adams, who is a wellness expert, but also  a musician. He writes in the blog post, "I know Winifred as an excellent singer and songwriter."

I'm really a big fan of Oz and I was trying to listen carefully, when in a flash of not-terribly-sudden insight, I realized, I'm listening to an interview of Oz by a female musician named Winifred.

I  know Oz through our shared interest in Robert Anton Wilson and the Illuminatus! trilogy; he even did a guest posting for the online reading group at my request. So it was amusing to me to notice that he was talking to Winifred, not exactly a common female name. Illuminatus! of course has a character named Winifred who is a musician.

And it gets better. The Winifred in Illuminatus! has "long blonde hair." The members of the band have blue eyes. She is the only female member of a rock band, the American Medical Association. On an album cover they are "dressed in one piece white suits." The planned climax of their career is a big event in Europe.

If you look at Oz's blog post, you will see that Winifred Adams is dressed in white and has long blonde hair. In the course of the interview, you find out what she knows Oz (a recording engineer) because Oz worked on a recording session for one of her songs. She was in a rush to get it done, because she had a big project in Europe to go to (a music video). During the show, she thanks Oz for making her feel comfortable in the studio, because she was the only woman in an otherwise all-male band assembled for the recording session.

The show features house commercials, stressing that Winifred is a "medical intuitive."

Here's her web site, showing her logo (an "A" and a "W," i.e. an upside-down "M"). Scroll down for the picture of her, dressed in white again, on the shore of an ocean (or maybe a lake). The photo gallery on the site reveals she has blue eyes.

The Last.fm bio for the American Medical Association. "The band is no longer active due to their tragic deaths while touring Germany." There really is an album called "Illumination" by the AMA, but I don't believe Oz was the recording engineer.

Great blog, thanks Tom!. I didn't catch the Illuminatus! connection either until now.

I had fun with the Winifred bit, but I hope folks will actually download and listen to the podcast, Oz. I really enjoyed your discussion about music and what it means to you.