A dream with RAW 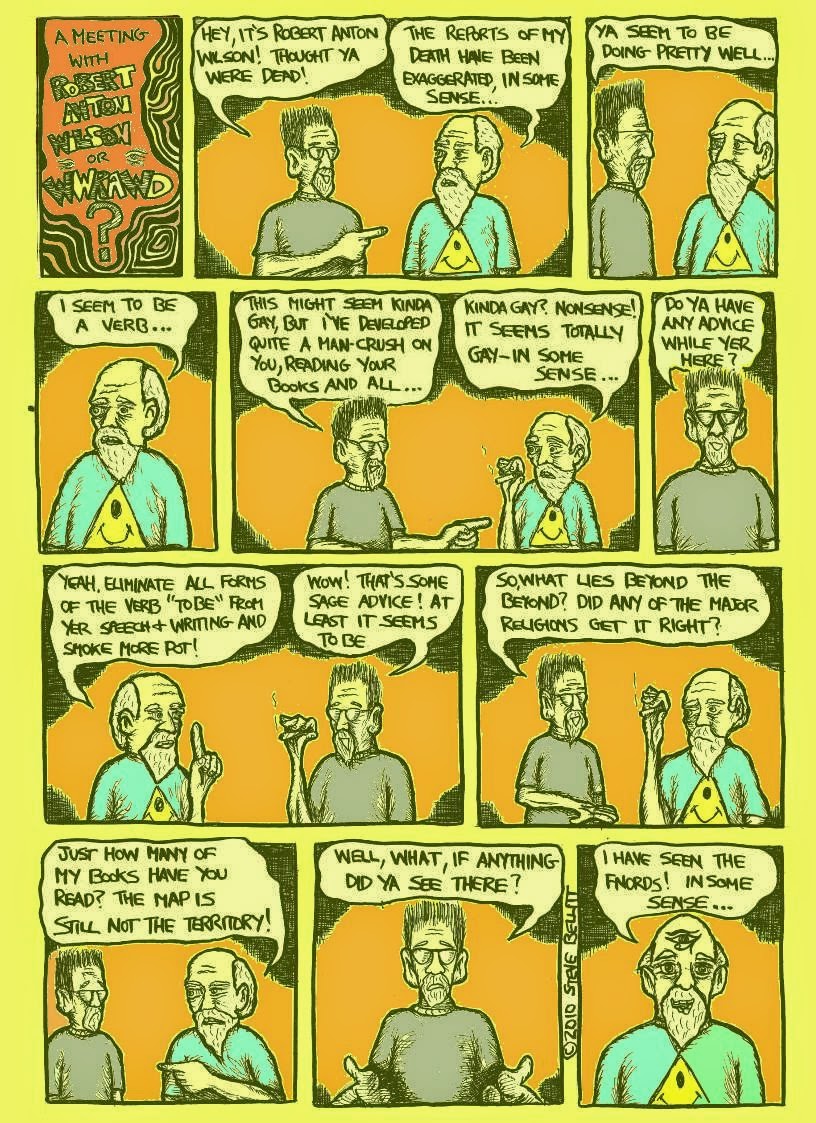 Oz Fritz in one of the posts on his blog suggests keeping a record of synchronicities and dreams, a strategy I keep meaning to adopt, although I wish my dreams were more memorable. In the meantime, one of this blog's readers, Dan, wrote to me recently to tell me about his dream, and I thought I would (with permission) share it.

The reason I am sending you this message is because of a dream I had last night. Frankly, you do not know me, but I figured you would take an interest in it because of the various elements of Pope Bob's were buried within this dream. And the fact that I could communicate with you about this topic without sounding like a nut job, from one RAW scholar to another.

Basically, in this dream, I met Bob. And for some reason the only thing we talked about was from a paragraph or two in Prometheus Rising, in which he talks about how a new economic system will emerge that is completely different from capitalism and socialism. I don't know why, but that's what we talked about. I told him I really enjoyed those paragraphs and he asked if I really understood it, which at the time, didn't make me think at all, I just nodded and of course. I continued on with saying how when I first read it I thought I understood it, but then I reviewed it and firmly understood/believed it. He chuckled and told me that I was a "smart kid." The whole time this is taking place, we're wandering around a friend's house, looking for something. Let me also mention that this house, in waking, has been home to some unexplainable events. Anyway, whatever this MacGuffin was, was never revealed. I asked Bob if he could sign my copy of Illuminatus (I think) and he gladly obliged.

I generally think this dream was my psyche trying to jolt me into general agnosticism. The fact that RAW laughed when I told him I firmly believed it, makes me think that he was laughing at my firm belief in the topic rather than my intellect. And the fact we were looking around in a place for something that could never be found could support my theory. And the punchline being that whenever my friend and I talk about the strange crap that happens at her house, we both get extremely paranoid. So the fact that this dream took place in a place of occasional paranoia seems like something that would make RAW laugh.

Or Bob actually manifested in my dream to bring my reality tunnel back into a state of agnosticism.
Or it was nothing.

Here is a blog post on waking life versus dreams.

I've illustrated this post with an old "Manic Doodlings" cartoon from artist Steve Bellitt about meeting RAW after RAW's death; the link is here.
on January 03, 2015