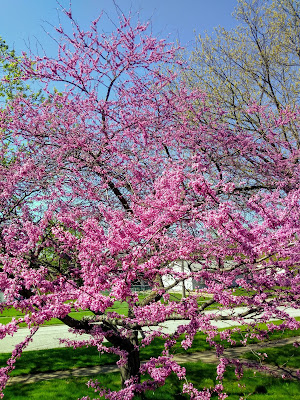 According to my brain, this tree in my front yard Sunday had bright pink blossoms

Have any of you had to read a chapter more than once? I struggled with Chapter 14 that last time I tried to write about it. I thought I did better when I sat down Sunday to read it again. And then I spent much of the day on the chapter's first exercise, "If all you can know is your own brain programs operating, the whole universe you experience is inside your head. Try to hold onto that model for at least an hour. Note how often you relapse into feeling the universe as outside you."

I found this passage helpful: " 'Mind' is a tool invented by the universe to see itself; but it can never see all of itself, for much the same reason that you can't see your own back (without mirrors."

And I liked this bit: "R. Buckminster Fuller illustrates the metaprogamming circuit, in his lectures, by pointing out that we feel puny in comparison to the size of the uinverse, but only our bodies (hardware) are puny. Our minds, he says -- by which he means our software -- contain the universe, by the act of comprehending it."  (Reading that passage again was a nice synchronicity, as I am reading an advance copy of the new Alec Nevala-Lee Fuller biography).

Although I concentrated on the first exercise, in my mind it kind of bled over to the second one, to consider the belief system on an educated reader of 1,200 years ago. Doing the second exercise connected to the first, because I realized how much of what I "saw" or "heard" was directly related to my understanding of what I was perceiving.

As my wife and I drove Sunday to a garden center to buy flowering plants for the garden, I turned on the radio and listened to a Cleveland Guardians baseball game. My person of 822 AD (let's assume somebody in the western part of Europe, where my ancestors apparently came from) would have heard the voices and realized they were people talking, but would  not have understood the concept of "radio" or "baseball." And as I listened, I could "see" the baseball stadium in my mind from having been there.

As we walked through the garden center, my Ninth Century companion likely would have understood the concept of purchasing plants for the garden. But there were things in the shop I instantly recognized through education and acculturation. For example, where were sculpture busts of Buddha to display in the garden; sculpture would obviously be a recognizable concept, but a European from the Ninth Century would not have known who was being depicted.  I didn't have to think about the busts being the Buddha; I just immediately registered it. As we drove home, I could see a contrail in the sky from a jet flying far overhead; that's what I "saw," but what would the AD 822 person have seen?

RAW concludes Chapter 14 by saying, "The only sensible goal, then, is to try to build a reality-tunnel for next week that is bigger, funnier, sexier, more optimistic and generally less boring than any previous reality tunnel." Perhaps he is about to explain, in later chapters, how to do that?

Interesting post. Reading you comments about the ninth century I thought of the growth of understanding of Medaeval music since 1945. I just read about that in Kerman's Contemplating Music.

I have had to read a chapter more than once, sometimes more than twice. This post makes me realize how much richer in the concepts we have than our ancestors 1200 years ago. For instance, the idea that mind contains Universe, that mind's awareness doesn't confine itself to the local body. I recall seeing Kurt Vonnegut apply that logic to reason why residents of inner city ghettos like to use drugs - it takes their minds outside the local impoverished environment.

" 'Mind' is a tool invented by the universe to see itself; but it can never see all of itself, for much the same reason that you can't see your own back (without mirrors)." I suggest that other people, other minds, function like mirrors to see parts of Universe unknown to our minds.

RAW gave the exercize, consider everything you see exists inside your head at a talk I attended. I found this exercize unsettling, at the time.

I cheered for the Cleveland Indians growing up despite them ending up in last place or near it during those years; glad they changed their name to the Guardians. Cleveland rocks!

Some things I expect will appear very different 1200 years from now, some things might seem depressingly similar. I don't see all humans progressing at the same rate. Some, on the cutting edge, may resemble pioneers exploring the stars, going where no WoMan has ever gone before. Others, may find themselves still locked in to the circular treadmill of tribal politics attempting to preserve some idealistic status quo of their dreams. Crowley predicted 500 years of dark ages based on cycles of history. He also predicted his teaching would gain much wider recognition in the 1960s. They did, though in the latter part of that decade after the Beatles put him on the cover of Sergeant Pepper's Lonely Hearts Club Band.
I consider we may have entered these Dark Ages around the time of the 9/11 terrorist attacks. I hope both Crowley and myself get proved wrong in this regard.

Spookah, thank-you for the support with my Deleuze tutorials, very encouraging! Small synch with the last one and this post. Tom mentioned getting gardening supplies on Sunday. I recorded a new Deleuze video Sunday, not posted yet. Though I didn't mention it in the video, that series ends with a discussion of The Gardner's Song from Lewis Caroll's Sylvie and Bruno

My mind seem to function in such a way that, for instance, spending an hour considering the idea that the whole experienced universe is inside my head is unlikely to wield much results. Constantly relapsing and feeling perhaps disoriented will probably be the outcome. But if I keep the idea in mind, in the background, and sort of let it simmer for a while, then maybe eventually and for no apparent reason it'll pop out again to the foreground, imbued with more depth or a new meaning. Those things take time to mature.

In the context of the metaprogramming circuit, the implications could be staggering, ie in changing the way one perceives the world "inside" one's head, the world "outside" would then appear to behave differently. It sounds both utterly banal to say and potentially very empowering to do.

This acts as a perfect example of what I was saying above. Someone might spend years finding boring the statement "if I look at the world differently, the world will look different", before being struck by how deeply it suddenly resonates.