RAW on the evils of taxation 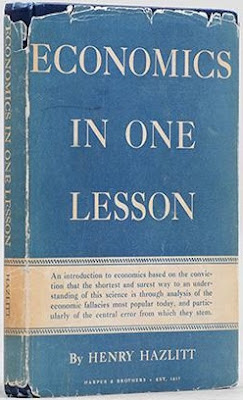 Despite the title, "Economics in One Lesson," the latest discovery brought back to light by Martin Wagner, is not a discussion of economics by Robert Anton Wilson so much as it is a discussion of the alleged terrible effects of heavy taxation on his attempts to make money from a new book. Although in hindsight, Wilson's real problem was that Playboy Press was incompetent in marketing and selling Sex, Drugs and Magick, a really good book that is currently the subject of Apuleius Charlton's ongoing online discussion (latest entry here) and which recently was reprinted by Hilaritas Press.

RAW's essay is a rather libertarian argument, even though it was published in Gnostica in 1975, and the title plays off of Economics in One Lesson by Henry Hazlitt, a book that's very popular with libertarians and free market types.

God I love that book.