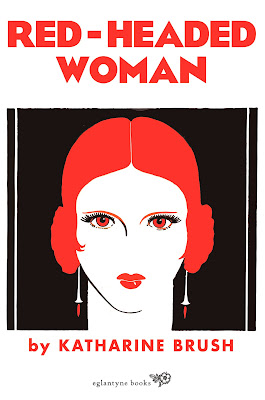 One of the items mentioned in Michelle Olley's recent Mycellium newsletter was the launch of Eglantyne Books.

The Sirius Mystery of course is mentioned in Cosmic Trigger. I was curious that the new publishing company would be like, so I went to the website, where I found six titles listed so far, and they do look pretty interesting.

I live in Ohio, and one particular book caught my attention, Red-Headed Woman by Katharine Brush, which has a protagonist from Ohio. Here is part of the publisher's description:

"Red-Headed Woman was a sensational best-seller, and it is believed that during the height of the Great Depression, the author earned more than a million dollars in royalties from it. It was made into the film Red-Headed Woman (1932) with Jean Harlow playing the role of the anti-heroine Lillian Andrews, who in the book is aged 19 to 21 during the two years, 1929- 1931 when the story is set. (Harlow was aged 21.) F. Scott Fitzgerald and Anita Loos both worked on the screenplay. The resulting film was considered so shocking that it was officially banned in the United Kingdom. Lillian has no heart whatever, she wants money, she wants things, she wants social status. From Ohio to the highest levels of Manhattan society, we follow her relentless trail of ascent, spellbound and unable to avert our eyes. It is the ultimate portrait of an entirely amoral gold-digger. She has such overwhelming sex appeal that no man can resist her, and all the women hate her. Brush writes with a direct style resembling that of Hemingway, never using an unnecessary word."

As Englantyne Books is a British publisher, it might be hard for Americans to find some titles on site such as Amazon. I have had good luck ordering British books from Book Depository, which provides free delivery worldwide.

An eglantyne, by the way, is an English rose.