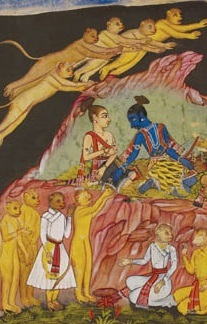 What the hand, dare seize the fire? - Blake

I’m happy to report that I feel as if I understood this chapter better this time around. On a cold January night over a decade ago I’m in a dark room on a dorm bed, kneeling with a face hot with seemingly endless tears. These tears don’t really come out as droplets, or I am not perceiving them as drops, but rather like some sort of effluvial web. My face has become a delta. I’ve ingested mushrooms for the first time in my life and I’m being told a story.

Last night my wife and I were talking about LSD in the context of “The Story of Jane: Ice Maiden” from Sex, Drugs and Magick; we were discussing the phenomena of people believing that psychedelics, especially LSD, are some sort of magic switch. We then began discussing the phenomena of how profound/not-seemingly-profound psychedelic experiences can lead to drastic change in people’s lives, usually not immediately (that almost always wears off), but over long amounts of time. I began talking about how my later experiences with LSD seemed to confirm over time and reflection that, contrary to the widely-reported experiences of a larger reality or knowledge of God, this was it. Whatever “this” and “it” might mean is still being deliberated upon. But those experiences confirmed for me that I am everything I’ll ever know. I am a composite of many different moments. There is an undertow of black, gold and stained wood.

Maybe not the most useful paradigm, but I’m surprisingly comfortable with it. The “I” on the dorm bed isn’t. Not yet. I wanted to storm the gates of Heaven and steal fire, find some sort of secret door into another, less-dull world. Soon, actually over a year from this night, I’ll be reading Prometheus Rising for the first time, much later in my consumption of Wilson than one might imagine, and I’ll grok a lot of it. I’ll be continually surprised by everything I missed over the years.

Today, rereading this beautifully written chapter, I am struck by the Magic Room game; it seems to be one of the most promising and enticing exercizes provided in the text. I can remember that the last time I read it I found Cagliostro’s Alien Game from The Trick Top Hat to be more interesting and useful. I can’t remember why I didn’t take it as a serious tip before that. Looking back over myself, I can pinpoint two plausible reasons: (one) I am hostile towards computers in my mind if not in practice and (two) I have read this book as a “mystic” many times and have overestimated the difficulty and performance of astral projection. Astral projection was something that concerned the “I” on the dorm bed with the wet face. It sounds terribly exciting and the best way to meet the gods, demons and grey aliens I wanted to find in the jungle of magic. Alas, it will come as a bitter disappointment when I realized that astral projection and pathworking is a very-willed exercise that isn’t quite what Crowley described in Magick Without Tears and The Temple of Solomon the King. Gods aren’t great at keeping appointments.

Reading the chapter I’m also reminded of the psychosynthetic self-identification exercise that I’ve practiced for years; that dissociation with the usual impressions of “self.” I question whether the “self,” that self that is a centre of pure consciousness, described and built by the exercise is another false self. I am okay with the idea; I’ve learned I can’t completely quit hypocrisy, but I can try to employ it strategically. I’m reminded of the years of therapy-training in psychosynthesis where my teacher would constantly admonish my pointed focus on the more fantastical elements of magic and instead asks me repeatedly to ask myself what is useful to my life. I’m arrogant and learning is hard before I begin to understand. I accumulate a lot of bruises before I learn to stop staring at the stars while stuck in the woods.

Now, the Magic Room game and its near future computer seem like an elegant experiment, primed for this moment. I’m looking forward to whatever “I” I might be in the future might make of the damnable computer that cannot process doubt. I feel the thrill of a younger magician, hungry for experience.

The I on the bed is listening to a story, as told by Richard Burton and collected by Jorge Luis Borges, read to me by my friend I used to ask “am I good?” It is “The Tale and the Poet:”

Tulsi Das, the Hindu poet, created the tale of Hanuman and his army of monkeys. Years afterwards, a despot imprisoned him in a stone tower. Along in his cell, he fell to meditating, and from his meditation came Hanuman and his monkey army, who laid low the city, broke open the tower, and freed Tulsi Das.

The story goes on Forever.

(For the members of the Sex, Drugs & Magick group, I apologize for my hiatus and have a small explanation in the next post. I'll be finishing it tonight and posting either this evening or tomorrow.)

Regarding acid as a magic switch recalls hearing someone say once that all serious teachers who worked with it invariably connected it to a spiritual practice or discipline of one sort or another; that it seems more helpful to consider it a possible assisting factor rather than a be all, end all, if used at all.

Apuleius, you mentioned Borges. For reasons I forgot already, I was just last week compelled to reread The Garden of Forking Paths (1941). In the story, said Garden is both a labyrinth and a book.
“I had questioned myself about the ways in which a book can be infinite. I could think of no other than a cyclical volume, a circular one. A book whose last page was identical with the first, a book which had the possibility of continuing indefinitely.”
Not only this describes a strange loop, but it also seems to me to be an accurate description of Finnegans Wake, published two years prior.

Right after the above quoted lines, the narrator talks about the Thousands And One Nights, and the strange loop within. I am now getting to the chapter in Gödel, Escher, Bach where Hofstadter describes recursive structures and stories within stories. A lesser known literary work filled with meta-stories and old-fashioned psychedelic esoterica would be The Saragossa Manuscript, written in the early 19th century by Jan Potocki. The film adaptation I recommend heartily.

The Borges short story also has a mention of “chess”, which Oz Fritz talked about last week, and its “theme has been said to foreshadow the many worlds interpretation of quantum mechanics” (quoting from Wikipedia), thus in a way connecting with the Schrödinger’s Cat trilogy. Perhaps a bit eerily, we also find the sentence “he opened a drawer of the black and gold desk”, echoing Apuleius’ second paragraph.

I am even being told that Deleuze uses this story as an example somewhere. By the way, Oz I really like your video series. I watch each one a good couple of times to try and wrap my head around what is being discussed. I feel like these very much connect and give depth to our current talks on the metaprogramming circuit.

Here can be read The Garden of Forking Paths:
http://www.mycours.es/gamedesign2012/files/2012/08/The-Garden-of-Forking-Paths-Jorge-Luis-Borges-1941.pdf

“I can’t get out – my horns won’t fit through the door.”
Until recently I was having a hard time seeing beyond the apparent goofiness of this example. I think it alludes to all those self-imposed constraints that translates as psychological or emotional blockages, and which can be experienced as very real. Some reframing then becomes necessary (therapy, psychedelics etc) and rather than solving the issue, often it simply stops being perceived as such.
Learning to successfully perform this type of heuristic on oneself seems like a good way to describe one aspect of the metaprogrammer.