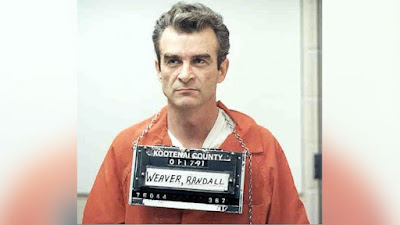 Randy Weaver has died. He was known for a confrontation with the government (arguable instigated by the government) at Ruby Ridge in 1992 that resulted in three deaths.

Robert Anton Wilson wrote about Weaver in the "Preface to the 2000 Edition" of Sex, Drugs & Magick: "In the 1980s, a Fundamentalist couple named Randy and Vicki Weaver fled to a mountain top in Idaho, to get as far as possible from the U.S. government, which they considered a Zionist conspiracy. However goofy that idea was, it was the only 'offense' of which the Weavers were guilty ... The Weavers sure had a lot of nutty ideas; nobody but another Fundamentalist would deny that. But maybe their idea of the nature of the current U.S. government, and its attitude toward its serfs and subjects, was a hell of a lot more accurate than the ideas you read in liberal journals."

Apuleius Charlton wrote about the case in a blog post that's part of the ongoing series about Sex,Drugs & Magick. His post argues that ultimately Weaver put his family in danger.