Buckminster Fuller biography out in August 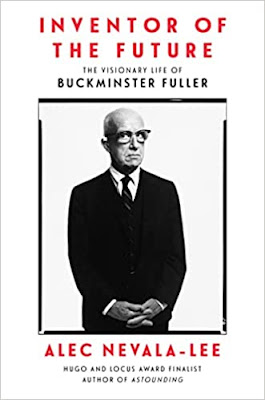 In a 2019 blog post, I reported that a new Buckminster Fuller biography was in the works from Alec Nevala-Lee, an author (and RAW fan!) who wrote the excellent book Astounding: John W. Campbell, Isaac Asimov, Robert A. Heinlen, L. Ron Hubbard, and the Golden Age of Science Fiction.

I can now follow up by telling you that Nevala-Lee's Inventor of the Future: The Visionary Life of Buckminster Fuller will be released on August 2.

Here is some of the description from the publisher's  blurb:  "Inventor of the Future is the first authoritative biography to cover all aspects of Fuller’s career. Drawing on meticulous research, dozens of interviews, and thousands of unpublished documents, Nevala-Lee has produced a riveting portrait that transcends the myth of Fuller as an otherworldly generalist. It reconstructs the true origins of his most famous inventions, including the Dymaxion Car, the Wichita House, and the dome itself; his fraught relationships with his students and collaborators; his interactions with Frank Lloyd Wright, Isamu Noguchi, Clare Boothe Luce, John Cage, Steve Jobs, and many others; and his tumultuous private life, in which his determination to succeed on his own terms came at an immense personal cost."

Of course, Robert Anton Wilson was a huge admirer of Buckminster Fuller, references to Fuller fill Wilson's books and Wilson interviewed him, an interview reprinted in Right Where You Are Sitting Now.

If you'd like to DM me your info on Twitter, I'd be happy to send you an advance copy! They should be available in a month or two. (RAW doesn't get a mention in the book, unfortunately, although I do cite his interview with Fuller.)