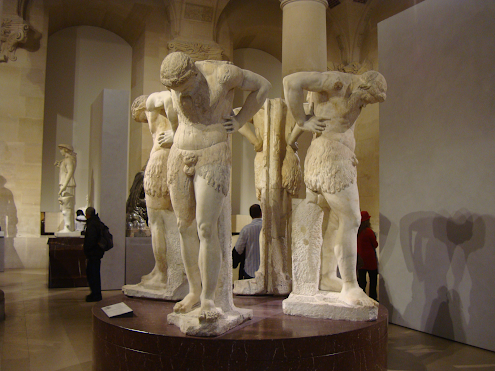 When I was younger and thus different than I am now (and thus beknighted and ignorant according to my current self) I vowed and swore and declared that I would not purposefully manipulate my daughter’s religious viewpoints. I take religion/spirituality/the lack thereof rather seriously and at the time compared raising a child in a religious ideology as a spiritual violation of autonomy. It wasn’t until recently I realized how gravely I had forsook my noble vow and broke my promise time and again. My daughter was playing with a wand.

Indeed, as I looked over it I had manipulated, corralled and exposed my daughter to everything that I love, my gods, my universe and magic from the youngest age. When she was an infant I surrounded her with fairies and read her The 1001 Nights. I conducted Enochian investigations in the room across from her where she’d come and visit as a toddler. When she was older I took her for long walks telling her stories about The Great God Pan and grey-eyed Athene. I filled her head with ideas about magic and hinted at possibilities outside the realm of the everyday. We made a game/exercise of her grabbing statues or items off my various altars and her asking what they were, as if learning a catechism. I immersed her in my beliefs and she is well on the way to making them her own and eventually something new.

I can’t say that I regret reworking the terms of my vow- after all, I never blatantly told her what to believe and now she is old enough to debate and consider ideas I bring up on her own. I’m pleased by what she is and might be. Did he smile his work to see?

Yesterday, at a rare family gathering one of my relatives remarked that my daughter acted “exactly” like me and was my “mini-Me.” I could only respond “that’s why I am so fond of her, I like things that resemble myself.” Did he who made the Lamb make thee?

I have lived most of my adult life in spaces that were consciously designed to suffuse me in my own bullshit. Consequently, I am nigh-neurotic in my preference for meeting with others in my own spaces. It is the same at school; I will always choose to stay in my room and insist that I teach in my room during classes outside the regular day.

Reading the material in this chapter is imminently familiar as I know it by rote, it is one of the things I digested easily when first reading Wilson, and it made me feel awfully smug about being on the right track as an adolescent. (He even refers to Blake as "The Poet," which tremendously warms the cockles of my heart.) In many ways it is the satisfaction of what one must feel when they hear the letter of their version of Natural Law. I guess I’m still awfully smug, although I am aware that I have become somewhat addicted to my exteriorized world to the point where being in another’s is decently uncomfortable after a short span of time.

I intend to do the exercises concerning mapping others on the four terrestrial circuits. I believe this is one I have done before and I hope I can find my notes as it would be interesting to see how my impressions have changed. While not listed as an exercise, I will give a brief example by notationally dissecting myself:

1st Circuit: Strongly oral characteristics with a deep aversion to adversity or pain

3rd Circuit: Deeply devoted to their own sense of logic and semantics, very dismissive of contradictory “logics”

4th Circuit: Strong currents of moralism and “ethics” obsession coupled with recalcitrant attitude toward many societal structures and norms

:( With that going for me, I should be able to write a pretty good fundamentalist Christian critique. All in good fun, one hopes!

Nice post, confessional in nature. Though not explicitly said, I hazard to infer that you, Apuleius, gave your daughter the metaprogram, "think for yourself, question authority" at some point ("old enough to debate and make the beliefs her own") either overtly or by example. How it happened for me growing up - got exposed to my parents' RC beliefs and attempted external indoctrination with not a whole lot of enthusiasm on their or my part; nonreligious programming efforts went into questioning assumptions. A typical dinner conversation might be: "What did you learn in school today? Columbus discovered America. How do you know the teacher is telling you the truth? If Columbus discovered America, why isn't it called Columbus, why is it named America? Then a discussion of Amerigo Vespucci would follow.

It occurs to me that a metaprogram concerning death may prove useful even if one doesn't plan to die soon or at all. This thought occurred after an episode of the Colbert Questionaire, a recurring episode on The Late Show with Stephen Colbert in which he probes pop stars in various areas to get to know them better. This standardized set of scientifically derived questions credits The Late Show Labs for its form. I confess a lack of awareness that some late night TV shows have their own laboratories, or as the English say, laboratories ("luh-bore-uh -tories" - I had a step-mother who switched all her Canadian communication programs to English ones after attending the University of Edinburgh ((pronounced "Edinborough, like the borough of the Bronx, not burg like burger - the silent "g" and "h" give Edinburgh a long "o" sound at the end; the English can seem tricky even when Scottish!))). One of the questions in Colberts Questionaire asks, "what do you think happens to you after you die?."

Seems a great question to ask someone about their postmortem program, or I should say metaprogram as it concerns a program for "going beyond,"(meta - and I don't mean going beyond the literal Facebook program). Don't consider this idle speculation, I have a firsthand account - my own. The night before my father shuffled off his mortal body, he broke down and said he didn't have anything to believe in, he said he didn't believe in Science (his vocation) and he didn't believe in Religion (philosophically inclined, he taught Comparative Religion as a post-grad student, and made serious attempts at the RC programs his immediate ancestors fostered upon him). Considering this issue the night before the program gets set to run may not make for the best timing. Thank-you Stephen Colbert and Late Night Labs for bringing it up.

I tried Eric's exercize mentioned last week of quickly reading Masks with a "Very pretty, not Homer" type of program running when encountering the historical people in the story, Joyce, Pound, Jung, Einstein, etc. My tentative conclusion, until learning more of their personal lives, holds that RAW uses these characters as what Deleuze calls "conceptual personae."

Another terrific post. I really enjoy all of your posts.