War on some drugs update 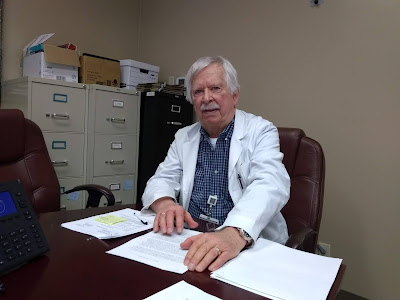 The gentleman in the photograph above is Dr. William Bauer, 84, who Wednesday was found guilty of overprescribing painkillers in a federal trial in Toledo, Ohio. He awaits sentencing.

I've written many stories for my newspaper in Sandusky about Dr. Bauer. He did prescribe many more painkiller pills than other doctors in my area, but the reason why is interesting. The federal government has cracked down hard on such prescriptions, and many physicians are terrified and are afraid to approve even legitimate uses of such drugs. I interviewed many chronic pain patients, people dealing with terrible pain, who went to Dr. Bauer, in many cases  because they felt abandoned by their own doctors. The patients told me the prescriptions they got from Bauer allowed them to function. Here is one of my articles.

Because of his compassion and courage (Bauer repeatedly denounced the war on drugs), the doctor is  now a convicted criminal.

If you aren't familiar with these issues, let me say that there is no question that prescription painkillers are high powered drugs that can be dangerous. They can be addictive, and people die from overdoses of them. But as a result of the government crackdown, which made it difficult for addicts to get pills, many people switched to heroin, which is often laced with fentanyl. This is a government policy that has helped produce record numbers of deaths by drug overdose. Government policy on opioids is just one factor in this, but it's an important one.

If you want to learn more about these issues, you would do well to read postings by Dr. Jeffrey Singer at the Cato Institute. Here is a recent blog post.

That's disgusting. My home is famous for being an epicenter of the opioid epidemic- there are plenty of write-ups and broadcasts about over-prescription of painkillers but very little about people being denied access to necessary medication.

There absolutely should be a spotlight on doctors who over-prescribe addictive painkillers, that light should probably be focused more on the salesman and pharmaceutical shills. I have talked with too many people who were denied proper care because of the current opioid crisis or being perceived as wanting painkillers for shits and giggles. Can't use anecdotal evidence in a court of law or academia, but damn it is convincing.