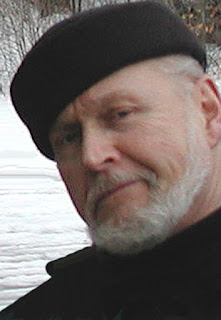 Barry Longyear has won the Prometheus Award, a science fiction award associated in various ways with both Robert Anton Wilson and Robert Shea.

He won for his novel, The War Whisperer Book Five: The Hook. The Prometheus Hall of Fame Award went to F. Paul Wilson for the short story, "Lipileggin'."

Yes, this is the same Barry Longyear who won the Hugo and Nebula awards for his 1979  novella "Enemy Mine." Here is his official website.  His personal blog, "Life Sucks Better Clean," is dedicated to helping people recover from substance use disorder.

F. Paul Wilson, perhaps best known for his novel The Keep and his "Repairman Jack" series, has won the Prometheus Award several times. In fact, he won the first one, for this novel Wheels Within Wheels, and the presenter at the ceremony was Robert Anton Wilson.

Here is the official press release from the Libertarian Futurist Society:

The 41st annual Prometheus Awards will be presented online in late August with an awards ceremony and panel discussion, with Reason magazine as the media sponsor of the post-ceremony panel. Reason editor Katherine Mangu-Ward and Reason book editor Jesse Walker will join LFS President William H. Stoddard and others (to be announced) to discuss "SF, Liberty, Alternative Publishing Trends and the Prometheus Awards."

The Prometheus Award for Best Novel

The War Whisperer, Book 5: The Hook, by Barry B. Longyear (Enchanteds press), has won the 2021 Prometheus Award for Best Novel for novels published in 2020.

In one of the rare novels to imagine a fully libertarian society and attempt to do so realistically, Longyear depicts a near future in which the Mexican government's bungled response to a devastating Category 5 hurricane prompts the people of the border state of Tamaulipas to secede, declaring themselves an anarcho-libertarian freeland. The protagonist, Jerome Track, must first decide whether the freeland is worth his commitment, and then develop an innovative strategy for its defense. In the fifth book of Track's autobiography, Longyear grapples with how a society that refuses to use coercion against its people can defend itself against military aggression without conscription or taxation, and develops an intriguing and plausible solution.

This is the first Prometheus Award recognition for Longyear, best known for the award-winning novella and film of Enemy Mine and the first writer to win the Hugo, Nebula and Campbell awards in the same year. However, several of Longyear's earlier works, most frequently his 1981 novel Circus World, have been nominated by LFS members for the Prometheus Hall of Fame.

The other 2021 Best Novel finalists were Who Can Own the Stars? by Mackey Chandler (Amazon Kindle); Storm Between the Stars, by Karl K. Gallagher (Kelt Haven Press); Braintrust: Requiem, by Marc Stiegler (LMBPN Publishing); and Heaven's River, by Dennis E. Taylor (An Audible Original, with print and ebook editions from The Ethan Ellenberg Literary Agency)

The Prometheus Hall of Fame for Best Classic Fiction

Lipidleggin', a short story by F. Paul Wilson, won the 2021 Best Classic Fiction award and will be inducted into the Prometheus Hall of Fame.

F. Paul Wilson, now a six-time Prometheus Award winner, won the first Prometheus Award in 1979 for Wheels Within Wheels and also won the Best Novel award for Sims in 2004. He's won the Prometheus Hall of Fame award twice before, for Healer, in 1990, and An Enemy of the State, in 1991. Wilson received a Special Prometheus Award for Lifetime Achievement in 2015.

While the Best Novel category is limited to novels published in English for the first time during the previous calendar year (or so), Hall of Fame nominees – which must have been published at least 20 years ago—may be in any narrative or dramatic form, including novels, novellas, stories, films, television series or episodes, plays, musicals, graphic novels, song lyrics, or verse.

The Prometheus Awards, sponsored by the Libertarian Futurist Society (LFS), was established and first presented in 1979, making it one of the most enduring awards after the Nebula and Hugo awards, and one of the oldest fan-based awards currently in sf. All LFS members have the right to nominate eligible works for the Prometheus Awards.

The Prometheus Award has, for more than four decades, recognized outstanding works of science fiction and fantasy that dramatize the perennial conflict between liberty and power. Such works critique or satirize authoritarian trends, expose abuses of power by the institutionalized coercion of the State, champion cooperation over coercion as the roots of civility and social harmony, and uphold individual rights and freedom for all as the only moral and practical foundation for peace, prosperity, progress, justice, tolerance, universal human flourishing and civilization itself.

The Best Novel winner receives a plaque with a one-ounce gold coin; and the Hall of Fame winner, a plaque with a smaller gold coin. Appreciation review-essays of each winner, explaining why LFS members view them as deserving of such recognition, will be published on the Prometheus blog (lfs.org/blog/) as part of our ongoing Appreciation series of all Prometheus winners.

Membership in the Libertarian Futurist Society is open to libertarians interested in how science fiction and other fantastic genres can promote an appreciation of the value of liberty. For more information, visit www.lfs.org.