New RAW book in the works 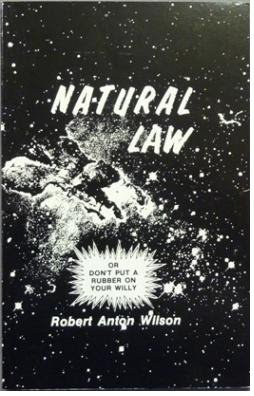 You'll get lots more official information down the line from Rasa, but Chad Nelson is ready to reveal that he's editing a book for Hilaritas Press, Natural Law + accompanying essays. This is not just a reprint of the long-out-of-print RAW essay Natural Law, but a new collection of various RAW pieces on political matters, likely of interest to libertarians but other folks, too, because if you've paid attention to Robert Anton Wilson's political writings, he did not write as an orthodox libertarian.

This apparently will be out sooner rather than later. "No date, I'm still working on the intro essay, but I would think it's going to be a 2021 drop," Chad reports.

Related to the Samuel Konkin post from yesterday, Chad shares this bit from an issue of New Libertarian;

"One interesting piece was SEK's postscript to RAW's Natural Law article. In it, SEK says, 'Bob remains our biggest single draw; more new subscribers ask about him than anyone else (since Heinlein's interview in 1973-1974). His reversal of the traditional positions of objectivists and Subjectivists took my breath away. A tactical genius.' And this from someone who disagreed wholeheartedly with RAW! Very cool that the fan mail was coming in most for RAW, and not any of the other better-known libertarian luminaries. I think he was shocking the libertarian conscience with some of his hedonistic remarks."

I meant to do a separate blog post on that, but the news is coming in fast and I have other stuff to share with you the next few days.

And here's this bit from Chad: Arlen gave Victor Koman an aloe plant "that has multiplied and is still alive!"

I note that this particular title was second to last on the Hilaritas list of republishing. Glad to see some unexpected chaos coming in to shake the "order".
Amazon says that the original book was only 72 pages long, so it's great if more essays will be added in this new version.

Thank you for sharing the news!