RAW Semantics on RAW and the Zen roshi 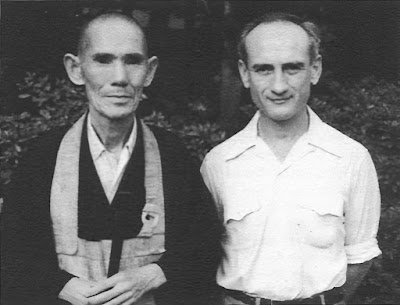 RAW Semantics has a new post up which explores (and solves) a mystery: Who is the "Yositani Roshi" repeatedly cited by Robert Anton Wilson who says, "There is nothing special about Enlightenment. You do it every night in your sleep. Zen is just a trick for doing it while awake."

It turns out that RAW has misspelled the name in several places and is referring to Hakuun Yasutani (1885–1973). RAW writes that he studied Za-Zen by taking training from Yasutani  Roshi, whose name is spelled correctly in The Starseed Signals. According to the Wikipedia biography of Yasutani, a well-known book on Zen, The Three Pillars of Zen by Philip Kapleau helped bring his teachings to the attention of the West.

Brian's post also has an ad for "23-SLEEPCOIN MINER," and wouldn't it be interesting to obtain enlightenment from an app?

The Wikipedia article also has quotations, by the way, showing that Yasutani was a fanatical fascist and supporter of Japanese militarism.  In fact, it would appear many Japanese Zen Buddhists had similar views. I would presume that RAW knew nothing of this.