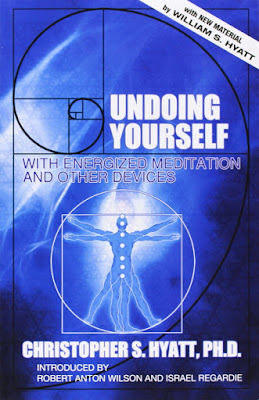 Well, I’ve struggled to practice two fifteen-minute meditation sessions every day. I have meditated most days, but have missed a few sessions. I do plan to get up to a month in a row. We will see. I have allowed life chaos to interfere with this exercise. I did find it interesting to return to Christopher Hyatt’s Undoing Yourself with Energized Meditation. I have the third edition. I remember haunting bookstores in the 1980’s searching for Wilson and related books in those pre-Amazon days, especially the Alpha Book Center in Phoenix, which got most of the Falcon titles.

I remember in 1986 feeling delighted when I found a copy of the second edition of Undoing Yourself at Alpha Book Center. I started reading it at my job at Hunter’s Books, and around pg. 36 I came across “The oral-anal pit can be referred to as 333. If you don’t know what that number means please look it up.” (I don’t know  the page number in the second edition. I may still have a copy in a box in the garage. If it turns up, I will look it up. I don’t think any of my local libraries have a copy of any of Hyatt’s books.)

Well, back in 1986 I didn’t know about 333 and Choronzon, and Hunter’s Books didn’t have any Crowley. We did have Cosmic Trigger, though, the only Robert Anton Wilson book I could order through our distributor at the time. I didn’t recall any reference to 333, but I looked it up in the index. Lo and behold, it did have an entry for 333. Wilson discusses 333’s appearance in a UFO story in Fortean News and he adds, “333 is the Cabalistic number of ‘that mighty devil, Choronzon,’ who once afflicted Dr. Dee in the 17th Century and gave Aleister himself a rough time in Bou Saada, North Africa, 1909, as recounted in The Vision and the Voice by Aleister Crowley” (Cosmic Trigger, pg. 168).

Upon reflection, I think Bob really did want us to do these exercises pretty much the way he wrote them in the book, especially in the revised second edition. He pointed to Prometheus Rising over and over again in his writings after 1983, saying basically that if you want to improve your life, try the exercises I put in this book. I may seem gullible in this conclusion.

Last century I attended three encounter groups, Omega Vector, Omega II, and Delta Vector. I found them interesting, and I appreciated that they didn’t charge any money. I have some friends who paid for the EST Training. I love the send-up of EST in the film The Spirit of ‘76.

I look forward to visiting the Lion House again. Nora Joyce liked the fact that one could hear the roaring of the lions in the zoo James Joyce’s grave in Zurich.

In 1988 I attended Who Framed Roger Rabbit? with a friend and his two kids to fulfill the exercise to watch a film “that small children like”. I wonder if the screenwriters named Roger and Jessica after the characters in Gravity’s Rainbow? A few months later I saw a theater marquee with a missing letter: Who Framed Roger Rabbi ?

In 2021 I watched a few Three Stooges short films and Abbott and Costello’s Buck Privates (1941).

The EST thing is also featured in the series 'The Americans' about Soviet spies in the U.S. in the 1980s.

I think the exercises in Hyatt’s book are good stuff. Reichian things he worked on with Regardie. Hyatt does a lot of leg pulling, but the physical exercises are gold. Spend a couple months doing those every day.

I worked with the exercises in Undoing Yourself and Secrets of Western Tantra by Hyatt and found them very effective. Some of the ones in the latter seemed more powerful than psychedelics, to me. His Enochian magick book co-written with Lon Milo Duquette and Crowley has been used by me for years.

Very interesting about the oral/anal pit = Choronzon, I don't recall hearing that before. I wrote about navigating through the chaos of the pandemic lockdown for the upcoming MAYBE DAY zine.

From what I've seen so far up to chapter 4, I suspect RAW intended the exercises to be tried as written.

I will try to commit to those meditation exercizes daily, and started this week. I do think though that if someone would be picking up meditation for the first time just because RAW says to, two times 15 minutes a day seems like a lot for a beginner. As for myself, regardless of the meditation itself, this exercize can serve as a practice in self-discipline. I tend to jump from one thing to the next quickly, without maintaining focus very long on a specific subject.

There is no Lion House anywhere near me, actually the only zoo in the entire country here features such wildlife exotica as goats and chickens. There was talks of introducing a polar bear some years ago by a mayor-to-be on campaign, but he also promised that as a true politician he wouldn't keep his promises if elected. He got elected and did just that, thus entering the paradox of the Liar.
Instead, I have been watching Life on Earth, the 1979 David Attenborough docu series. Yesterday's episode had a focus on the apparition of fish, which drew me back to last chapter's exercize.

It would make sense if RAW would be pulling the reader's leg every now and again, what with being indebted to Crowley and Zen masters.
Pushing the devotion to the exercizes to the point of getting "roaring drunk and pound the table, telling everybody in a loud voice just what dumb assholes they all are", because the book says so rather than this happening as an accident, would that not look like following blindly a guru ? Besides, as Oz Fritz said before, we've all made asses of ourselves in the past, so perhaps some exercizes like this one could be done retroactively.
When getting very drunk in the past, I usually tended to pass out in some corner before having a chance to call people names.

In the related course from the MLA, Bob Wilson was asking to read his introduction to Adam Weishaupt ( http://rawilsonfans.org/diogenes-lamp-introduction/ ), as well as to:

"Make 4 copies of the Leary Interpersonal Grid [PromRis p 76] using yr scanner or going to a xerox shop
Black out with pencil or crayon all wodges that describe your habitual interpersonal reactions [“games.”]
This represents a profile of the first two dimensions of yr ‘mind.’
Have 3 critters who know you fill out the same grid giving their profiles on you.
PREPARE FOR SHOCKS."

In the 1989 introduction to Ishtar Rising by RAW, he mentions his appearing in a TV film called Borders. This might be old news for many, but here it is:
https://www.youtube.com/watch?v=yNZpRSuOB64
Being about borders, how artificial they are, and the need to abolish them, I think it serves as a nice complement to this PR chapter 4 about "the anal emotional territorial circuit". The film also has a weird short dramatized bit featuring Steve Buscemi.
After the Christoph S. Hyatt connection, this is yet another bridge between Prometheus Rising and Ishtar Rising, which I find nice since we are currently going through both in two sister reading groups.

I recently realized that, since I stopped looking for coins, I have not "accidentally stumbled" upon any. Maybe I just have not been paying enough attention. Or maybe my mind stopped manifesting them. I do not know and do not feel the need to, I simply noticed.