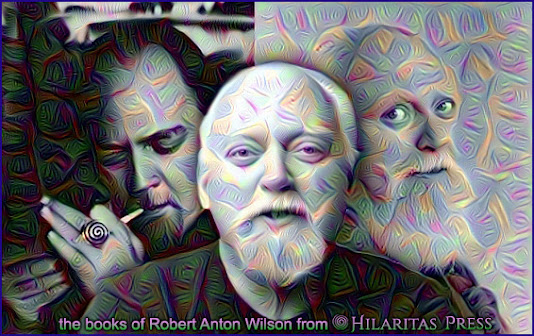 The listing of Hilaritas Press publications was determined, mostly, by Amazon's sales rankings. We wanted to work on the more popular books first. That was pretty much the only consideration.

In light of that, here's the current Hilaritas Press publication list, with the books that have actually been published in boldface:

In the light of Rasa's explanation, it's interesting to see (for example) that Email to the Universe, one my favorites, did well, and that Cosmic Trigger II, another of my favorites, did relatively well but is only at the #9 spot. You can look and see if your own  personal favorites were hits.

A couple of notes: the RAW Trust apparently does not have control of some of the fiction titles, so we don't see Masks of the Illuminati, the Schroedinger's Cat trilogy or Illuminatus!. Right Where You Are Sitting Now also is missing.  The Hilaritas list consists largely of titles originally published by New Falcon.

Note also that the list does not include Hilaritas Press titles by other authors such as Daisy Eris Campbell or Bobby Campbell. For a full look at what HP has to offer the RAW fan, please visit the website.

I think it would be great if eventually the RAW Trust and Hilaritas Press could get back the rights of the entire bibliography. Not being familiar with the legal details, I have no idea if that is even a remote possibility.
The Illuminati Papers is missing as well.

Also, considering the publication rate so far, we can avance the idea that all 20 books from this list will be done getting republished within a couple of years or so.

Rasa and Christina are doing an amazing job with Hilaritas, many thanks to them and everyone involved for their hard work!

I hope they keep my blurb on the back of Reality Is What You Can Get Away With, like the first two editions.