When science fiction split over the Vietnam War 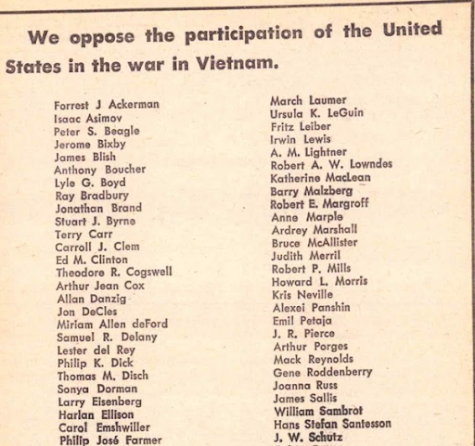 The F. Brett Cox book about Roger Zelazny I blogged about yesterday points to something interesting in the notes: The dueling ads that ran in the June 1968 issue of Galaxy, a science fiction magazine, opposing and supporting U.S. involvement in the Vietnam War.

Among the folks in the antiwar camp, I am pleased to see Isaac Asimov, Terry Carr, Philip K. Dick, Harlan Ellison, Philip Jose Farmer, Ursula K. LeGuin, Robert Silverberg and many others.  I am also struck by how many writers I really like show up in the pro war camp: Robert Heinlein, R.A. Lafferty, Jack Vance, L. Sprague de Camp, Poul Anderson. Not a surprise to see John Campbell and Marion Zimmer Bradley in the "wrong" ad.  Some writers don't show up on either side (e.g., Frank Herbert for example), British writers apparently weren't asked to participate and Robert Anton Wilson and Robert Shea don't show up probably because the ad ran years before most people know who they were.

Brett pointed to the ads to make a point about Roger Zelazny's public persona; although Zelazny was very approachable, attended science fiction conventions and was friendly to fans, he did not discuss his private life and also largely stayed out of politics (he was already famous in 1968 and doesn't show up in either ad.)

The contemporary writer who reminds me of Zelazny in this regard is Neal Stephenson, another favorite of mine. I read Stephenson all the time, but I know little about his personal life or his politics. Jack Vance was fairly reticent for much of his life, but wrote a memoir when he was very old.

From the article: “No shortage of contradictions. He is an ardent militarist and Naval Academy graduate who believes the draft is slavery and the armed forces pathetically inept. A man living on the edge of tomorrow whose thoughts seem trapped in the past; a former Annapolis dueling champion and expert marksman with a very soft spot for his orange cat, Pixel. "I have a theory that cats are going to take over. After all, we're obviously on the skids. This whole house is run for the comfort and benefit of that one little tomcat." A detester of big government who calls the Korean and Vietnam wars "scandalous disasters," yet shocked an audience of midshipmen in 1973 by telling them that America faced "possible extinction" since "any nation that loses its patriotic fervor" is doomed.”

Thanks, Hugh, I loved the article. Wish I could see the house.