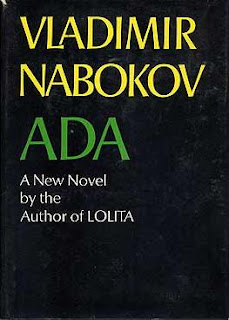 I am responsible for starting Chapter 3 of Prometheus Rising in tomorrow's blog post, for our online exercise/reading group. But to wrap up Chapter 2, and in light of the fact that Eric Wagner says this is a "do the exercises" effort, I thought I'd do a blog post on Exercise 3 of Chapter 2. That is the "why is it here" exercise for "any household object."

The object I chose was an old book club edition of Vladimir Nabokov's novel Ada, a used book which I had for years and finally got around to reading in 2017. Here is what I noticed :

1. My parents are readers, and ultimately I have this book because I saw it on their bookshelf for years growing up and eventually they let me have it. It says "book club edition" and I don't think they belonged to a book club, so I don't know how they got it.

2. When I was in high school, one of my English classes assigned me to read Despair by Nabokov, and it made me a lifelong Nabokov fan.

3. When I really get into an author, I like to keep reading titles by him or her. I hung on to the Nabokov book for years, keeping it in my possession in two states, because I suspected I eventually would get around to reading it.

5. Vladimir Nabokov had a best selling book in the 1950s with Lolita. This turned him from a literary writer, probably not too well known to many Americans, to a successful and widely-distributed author, hence the book club edition of Ada that wound up in my parents' home in Tulsa.

6. Nabokov became a cosmopolitan, internationally-known author after his family left Russia after the Russian revolution of 1917. Perhaps he would have become a Russian author, known mostly to Russians, if the Germans had not opted to help Lenin travel from Switzerland in a journey back to Russia. (Nabokov spent his final years living in Switzerland).

7. Book clubs were invented as a way to distribute cheap editions of hardcover books through the U.S. mail. I belonged to the Science Fiction Book Club when I was in high school. My copy of Ada is a book club edition.

8. The invention of paper and of printing with movable type and the rise of manufacturing allowed inexpensive books to be distributed to the masses.

9. I was not very athletic or very good as sports as a kid, so I developed the habit of reading a lot and obtaining books, hence the fact I always have had lots of books in the house, such as the Nabokov novel, despite the fact I am always discarding books to keep them from overrunning the house by selling some of them to a used bookstore.

10. I married a librarian. She did not think it was absurd to transport many boxes of books from Oklahoma to Ohio.

11. The subtitle of Ada is "Or Ardor: A Family Chronicle" and the first sentence refers to Anna Karenina by Tolstoy. So the book, at least in its current form, would not exist if there had not been a famous Russian writer named Tolstoy.

12. Written Russian dates back to the invention of a Slavic alphabet by two missionaries, the "apostles to the Slavs," Cyril and Methodius. They invented an alphabet for the Slavic language, and the modern form of that alphabet, the Cyrillic alphabet, is still in use today for Russian.

13. Cyril and Methodius were ninth century missionaries from the Eastern Roman Empire, e.g. the Byzantine Empire. The Byzantine Empire existed because a Roman emperor named Constantine, who had become a Christian, won a series of civil wars and founded a "new Rome," at the site of Byzantium, which became known as Constantinople. The strategically-placed city flourished, and when the western Roman Empire fell, the eastern empire survived.

14. Russia takes its name from the Rus, Vikings who colonized lands to the east of Scandinavia, going down big rivers in their longboats and eventually assimilating with the local Slavs. From the Rus evolved the county we know as "Russia." So because of the wide-ranging Vikings, we have "Russian literature" and "Russian writers" such as Nabokov.

Once again, I had totally forgotten about this last exercize with a household item. Seems like a nice Sunday thing to do.

I like a lot all those different directions you went, starting from this book. Great example of the virtually unlimited possibilities.

I admire your ability to try and not keep too many books. How do you do that ? Is it as simple as selling back whatever you don't think you will be reading again in the future?

I completely overlooked the household item exercize too. I tried it last night contemplating a ritual dagger I bought from Herman Slater at the Magical Childe bookstore on W19th St. in New York in the early 90s.

@BFHN, just to keep my house from being completely overrun with books, I do sell some if I think I won't read them again. But I often buy Kindle ebooks, allowing me to add to my library without filling my house with clutter.