Roger Zelazny: Just thought I'd write this to apologize [UPDATED] 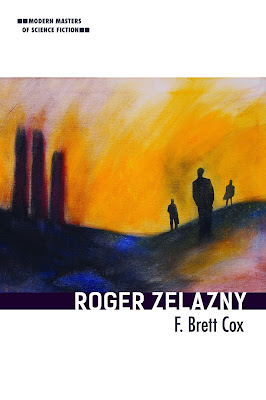 Years ago, when I was at a science fiction convention, I was seated at some event near a woman who complained about writer Maria Doria Russell. The woman explained that she had been trying to for years to write fiction, with little professional success. Russell (who, as it happens, lives in the Cleveland, Ohio, area, as do I) had explained in an interview that she had decided to try her hand at writing a novel, in imitation of her favorite writers. Her effort, The Sparrow, created an immediate sensation and won Russell a slew of awards. It was hard for the woman seated near me to deal with the fact Russell had succeeded so apparently effortlessly.

Another writer connected with Cleveland, area native Roger Zelazny, must have excited similar envy during his career. Zelazny became a successful and well-known writer quite early in his career, and that's one of the topics covered in an excellent new book about Zelazny, Roger Zelazny, by F. Brett Cox. Cox, an old friend, toiled on the book for years; I'll post a link to my article about the book when it pops up on my newspaper's web site later this weekend. [UPDATE: Here is my piece.]

Roger Zelazny is the sort of outstanding book I read very carefully; after finishing the actual text, I pored through the bibliography and notes and spotted a familiar name. An interview with Zelazny by D. Scott Apel, Robert Anton Wilson's longtime friend and partner, and Kevin Briggs, was listed as from a "privately bound thesis" published in 1980.

The interview is also published in a book, Science Fiction: An Oral History by Apel,  and in the interview, recorded in 1977, Zelazny describes how his name became known in the SF field.

Zelazny at first sold some quite short stories to the magazines Amazing and Fantastic, to a brilliant editor named Cele Goldsmith who discovered him and many other prominent writers. After awhile, Zelazny wanted to see if he could sell to another market, so he dug up a longer old story, one he wasn't sure was any good. He had refrained from submitting it, he told Apel and Briggs, because "I felt I had overdone it, that I'd thrown in everything but the Martian kitchen sink, that I'd overwritten it, and that I'd made the character too introspective to be sympathetic." But, well, might as well throw it out there. "I wasn't really sure of that as a story, but I was prompted to submit it because I wanted another story to to send in that week."

The story was "A Rose for Ecclesiastes," and The Magazine of Fantasy and Science Fiction made it the cover story. It made Zelazny's name among science fiction readers.

The story came out as it was becoming clear that old-fashioned stories about humanoid races on Mars and Venus were not really compatible with the known science, so Zelazny decided if he wanted to write another such story and set it on Venus, he'd better hurry up. So he sat down and wrote "The Doors of His Face, the Lamps of His Mouth" and sold it to F&SF, and it was another famous early story.

Zelazny began to feel guilty that he "might have offended an editor I liked very much," Goldsmith, who had been so supportive and bought his early stories, by publishing "Rose" and "Doors" elsewhere.

So in much the same fashion I guess that somebody else might dash off a note of apology, Zelazny "decided to make it up to her by doing something at greater length  other than those novellettes, and putting a lot of thought and effort into it."

That story was "He Who Shapes," which won a Nebula and turned into Zelazny's second book, The Dream Master.

Apology accepted, or at least one hopes. Zelazny didn't mention Cele Goldsmith's reaction. If you look up the January 1965 issue of Amazing, Zelazny's story is listed on the cover, although the cover painting illustrates another story.  (Brett carefully records which two issues of Amazing the story was serialized in, typical of the care he put into the book). 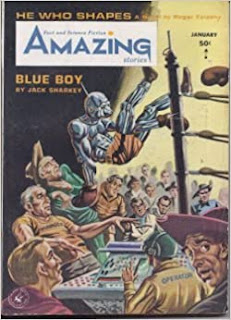 The interview with Zelazny in Apel's book is quite good, and when I originally read it, I noticed Apel and Briggs based many of their questions on close readings of the authors, and the result was really good interviews. The book is still available on Amazon, and it's just 99 cents for a Kindle. The interview with Robert Anton Wilson is available also in  Beyond Chaos and Beyond, and a longer version of the Philip K.. Dick interview was published as a separate book, but as far as I know, the Oral History interviews with Zelazny, C. L. Moore, Leigh Brackett, Theodore Sturgeon, Fritz Leiber and Norman Spinrad are only available in Apel's book.

I always liked “For a Breath I Tarry“... and read many Zelazny novels.