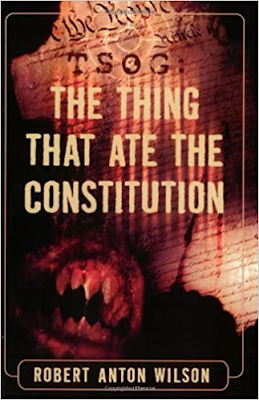 Twitter is going through another spate of "reexamining RAW, what should we criticize about him?" and the remarks are all over the map; if you want to sample it you can look for  Ted Hand's account and follow various threads. (At times, the likes of Erik Davis and Prop Anon weigh in.)

I don't know what I'm supposed to say about this. It's one thing to say "he's capable of often getting his facts wrong." (I admitted as much when I wrote about The New Inquisition.)  It's another to say, "I'm so disillusioned to discover RAW isn't an expert on everything!" Doesn't that say more about you than it says about Robert Anton Wilson?  Many problems are solved by thinking of Wilson as "an influential and interesting writer" as opposed to "my personal guru."

And many people who criticize RAW's politics have political beliefs that strike me as puerile, so much of this seems like a matter of taste.

And I don't think RAW is someone you read for a balanced, scholarly treatment of feminism, but does that mean he can't criticize the "Beethoven is a rapist" college professor?

I think some of Wilson's books are really, really good. Some of them are not so great, but have bits that I like.

Perhaps it might be interesting to consider specific Tweets. Here's one:

He thought it was totally cool and funny to write a book with a title that plays off a huge antisemitic trope. The Rand thing is *not* the bottom of the barrel. pic.twitter.com/JWrxTpQ1zi

I don't know Francis Jervis. The Tweet is referring to TSOG: The Thing That Ate the Constitution. Setting aside "the Rand thing" (Robert Anton Wilson was hardly an Ayn Rand acolyte), what about the main point of the Tweet?

Presumably the claim is that the title plays off of Zionist Occupation Government.

Page 33 of my New Falcon paperback explains that TSOG stands for "Tsarist Occupation Government." That would fit with other RAW references to "drug tsars," as folks such as William Bennett were known. So if you want to be generous, you could say that RAW is referring to a common term in the "war on some drugs." It also seems germane to note that he wasn't known as an anti-Semite.

Having said that, I can't say I'm thrilled with the title, which seems to invite misunderstandings. I often have the impression that New Falcon didn't really edit RAW's books very much. That must have given Wilson a sense of freedom, but a good editor likely would have asked for a better title. Perhaps this illustrates the limitations of going without a real editor.

Hilaritas Press eventually will get around to its own version of TSOG. Will it keep the same title?

The Gematria of TSOG resonates strongly with the book's subject matter. In the Introduction of Ishtar Rising RAW explicitly states the Hermetic nature of his books. In the Book of Thoth Crowley riffs on the etymology of words that begin with "TS" or their permutations like Tsar and Czar. RAW appears to connect with that trope with the TSOG title. I'm not familiar with the recent twitter critics (twitics?) of RAW, but I hope their simulations of him aspire to a little more depth than the superficial before passing judgement. We get the RAW we deserve.

This is silly. It "plays off" the ZOG idea by parodying it.

I really respect and appreciate the criticisms that Ted and others have brought to the table and wd like to encourage engagement with them as healthy & nutritious 'food for thought' rather than as an attack in need of rigorous defense.

It actually seems pretty rare for RAW's work to get such well informed crit done in good faith, and in terms of feedback, what better kind?

Some of it may ring more or less true, depending on our own POV, but seems like just the kind of thought experiment RAW wd encourage :)))

This seems esp important for anyone carrying these ideas into the future.

"You respect a good book, contradicting it – the rest aren't worth powder" - A Cantos fragment oft quoted by RAW.

I studied Ezra Pound with RAW before I knew about EZ in the larger context of modernity and history. One day I went to the library because I wanted to learn more about this sensationally precise prose stylist, and found myself in for a bit of a shock!

I asked RAW about this kind of like "Mr. Wilson, WTF?"

And he said that Pound's writing didn't contain any traces of his anti-semitism.

Now I don't find any need for "blame" or accusatory labels in any of this, but it seems pretty fortunate that I got a heads up about having received a potentially bad take from a very trusted source.

Again, RAW knew his ideas wd need updating in light of future advancements, he pre-built this discourse into his process. "Process models feedback"

@Oz and @Jesse, whichever way Hilaritas decides to go, I suspect a "publisher's note" on the title may be in the offing. @amoebadesign on Twitter remarks, "always having to explain the acronym is never good."

@Bobby, great anecdote about Ezra Pound. If I was filthy rich, I'd put Eric Wagner on retainer. He'd have to take my phone calls day or night if I had a question.

I've always taken the book title as parody. Knowing RAW, I don't think I could take it differently. The T certainly stands for Tsar, and it refers specifically to the Drug Tsar, but could refer to any authoritarian government official. It is possible that some racist people could think it supports their BS, but I don't really care about that. That would be fun if they bought the book with that understanding and then had their brains scrambled a bit.

We are very hesitant to change anything in RAW's new editions that we think RAW desired. I'm guessing RAW liked the title, and I suspect that if he had fears about it being misunderstood, he probably would have mention that to someone. Maybe not. I'm open to any suggestions for how to "repackage" the book, but I'm inclined to leave it the way RAW intended.

Tom, thanks for the kind words. I had an arrangement like that with Donald Trump, but he just wanted to talk about the Marx Brothers.

Rasa, I agree with you. I have very slight reservations about the title, but I would not change it. I suggest repackaging the book with an introduction by Bobby expanding on what he wrote above. You could get Michael Johnson to do an afterword about Vico and get Fly Agaric and I to do afterwords about the Tail of the Tribe.

I remember about 21 years ago Bob invited me to participate in a web discussion of Ezra Pound. It went on for a couple of months. I don't remember the name of the hosting website, alas. I remember I found it a few years ago, but I had forgotten my password. I emailed the webmaster, but they couldn't get in either.

Pretty clear to me that TSOG was a typical, playful RAW Lovecraft riff along with the campy horror title The Thing That etc...

I vote leave it as was. But it would be among the last books of his I’d choose to reprint; just didn’t think it was that good relative to his other work. Disclaimer: I read it only once immediately after it came out, so details are hazy, but I remember thinking it wasn’t much fun or very convincing.

I'm with Jesse on this one. If this title is anti semitic, then are we to believe as well that Illuminatus! "really is" pointing the finger at the Illuminati as a mega-conspiracy? Or that RAW thought that the scientific "inquisition" was as bad as the original one (ie torturing and burning people)?

If anything, isn't "playing off an antisemitic trope" a way to defuse it by showing how ridiculous is suddenly sounds like with just a twist of detournement?

Let's get serious here, the illustration and overall design of that book is what I found shockingly ugly.

I love TSOG, especially the ending.

'And many people who criticize RAW's politics have political beliefs that strike me as puerile, so much of this seems like a matter of taste.'

Having attempted to dip my toe into RAW discussion on Twitter, once, with disappointing results, when I've observed the critical threads from afar since then, the sum total of the criticism has struck me as little more than "I disagree with his opinions as they appear to be written, so he is obviously wrong."

A criticism often written from an increasingly distasteful framing akin to how they were much more simple and unintelligent when they first came across his writings, but have since 'evolved.' Couched in pseudo intellectual and condescending faux academic pretension. Which, personally, I find hugely off-putting.