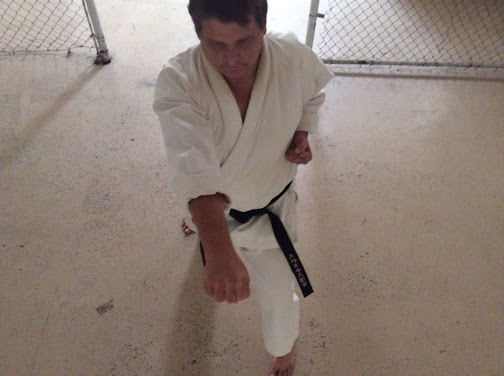 Craig Hargis, a fifth degree black belt in karate do

An exercise in chapter 3 of Prometheus Rising calls on the reader to take a martial arts course for at least three months. I have had the great good fortune to study kenpo and tai chi with Mr. Gary Toppins and karate do with Dr. Craig Hargis. Dr. Hargis kindly consented to the following interview.

Eric Wagner: How did you get involved in the marital arts?

Craig Hargis: My dad was stationed in Japan after the war and was impressed by Japanese martial arts. He put me in Judo at ten years old and karate a couple of years later. Back then the words judo and karate were almost always used together and few people really knew the difference. There was always some karate included in judo self defense practice.

EW: Why did you choose to focus on karate do?

CH: I did not really mean to leave judo, I was actually kind of talented in it.  It was just that karate increasingly absorbed my practice time. I practiced judo even out here until 1974 at LACC with Hayward Nishioka. Judo is really a sport, and real karate decidedly is not. That was the gravity of karate for me.

EW: Whom do you consider some of your significant teachers?

CH: I define a teacher as being someone you directly ranked with. Mine would be Yoshio Kimura, Kiyoshi Yamazaki, and Ed Hamile and Ken Funakoshi. I was very lucky to find myself in Southern California where most of the important instructors visited frequently, so I at least met them.

EW: Has practicing karate do affected other areas of your life?

CH: Mr. Egami, a great Shotokan master, said that, put simply, karate do is life and life is karate do. A karate man is always a karate man, though good ones hide that from others. What that means is that when you think of yourself, you think of karate first and most often. It is more than anything else your identity. Karate is all consuming or should be. People around you may (or should) have no idea how much karate influences everything you think and do.  I once heard karate defined as observing economically. You let life wash over you.

EW: Texts like Karate-Do Kyohan by Gichin Funakoshi and Dynamic Karate by Masatoshi Nakayama seem very important to you. What do those books mean to you?

CH: Books are so much better than video. These books are symbols of continuity. They are things to which you return for a lifetime. A book can be held and carried. In many ways, the key books are karate itself. The young men in the pictures grew old and died but they have never changed in the book. The pictures and text combine to make an indelible imprint in the mind of what good form looks and feels like. The imagination can easily link still pictures in motion but can never extract terminal positions from video. Because you have met and known many of the authors the books keep karate forever young.

EW: What other martial arts books do you recommend?

CH: Shigeru Egami: Karate Do Beyond Technique. This is the best book on the emotional, spiritual, and mental reality of karate ever written.

EW: You recently posted on Facebook, “To my Karate friends. Of all the Japanese instructors, who did you find the most approachable, open, friendly and likable?” What provoked you to ask this question?

CH: Curiosity. I meant to say "not the best instructor but simply the nicest and most approachable famous teacher."  Most are really quite friendly. CW Nicole writes in Moving Zen of a Japanese rough who tried to pick a fight with Nakayama Sensei on a subway. Nakayama got off at the next stop and Nicole wrote, "So Sensei left and the fool never knew how close he was to death."  I always loved that simple idea.

EW: You spent decades as a college and high school teacher. How did your martial arts practice influence your teaching?

CH: Just to be myself, be confident, and know that most of the students would like me. Also to try and get odd angles on a subject. You try to be open, and personable like a good karate instructor. Teaching a physical art is different than teaching a text – though arguably kata is a text.

EW: How has martial arts training helped you deal with life challenges?

CH: Life is a challenge, and you can't deal with it really. To try and defeat it is your death. The down side of karate is living too much in the past and relying too much on memory. It is lonely. The old Kung Fu series did a great job of demonstrating this. Back to life: You have to somewhat ignore it, let it go. You are immersed in water but you are not the water. Though of course you ultimately are water but not manifested as so. Life is standing in a stream of running water--sometimes deep, sometimes slow, and sometimes fast. But it always flows around you, over you but not through you. If the water flows through you it means you have drowned, died. But karate is in the end is a perfection in waiting or even in loneliness in that it cannot be shared, and very few know who you are.

EW: Thank you very much.

I realized I had forgotten to ask Dr. Hargis about his rank, so I sent him a follow up query. He responded, “My permanent rank is godan (5th degree black belt, highest technical rank in traditional Shotokan).  Instructor title is Hanshi, International master instructor.” Thank you for doing this interview, it feels like a novel way to approach PR, bringing in someone not directly related to RAW. Even though things like Zen or the Tao Te Ching already were influencing the early Discordians.

Some interesting bits of wisdom to ponder about in this text. "Though of course you ultimately are water but not manifested as so" for instance, to me resonates with things we discussed before, such as the necessity to have a free flow of emotions and energies in order to stay as much as possible in control of our body and life.

"karate is in the end is a perfection in waiting or even in loneliness in that it cannot be shared, and very few know who you are." This also makes me think of the potential alienation for psychonauts. Not only it might be wise not to be too loud about one's use of entheogens for personal growth due to their being mostly illegal all over. But even leaving psychedelics aside, simply trying to explain someone your scouting for quarters has chances of falling on deaf ears to says the least.

Since it gets a mention during the interview, I went to watch the pilot episode of Kung Fu. I'll keep on watching more.

Also, there's a great typo in the first question: "How did you get involved in the marital arts?"
Perhaps someone with a few decades behind them of practicing this specific art could confirm or not that a high degree of Zen is needed there... I find it amusing to reread the whole thing through this lense.
"You let life wash over you."

Great interview! The analogy with water in the last answer reminds me a bit of the Sufi maxim to "be in the world but not of it," the explanation here runs a little deeper. It also recalls Finnegans Wake. "[P]erfection in waiting and the loneliness aspect seems to apply to various evolutionary (spiritual) paths. This value of "waiting" turns up in Stranger in a Strange Land, for instance.

I have never tried martial arts. I did try marital arts for many years and learned much, the women, fellow artists, always seemed smarter than me. I have practiced hatha yoga for many years, it became the first real discipline toward getting my shit together in my early 20s. I've had the experience of rereading something after a yoga session and noticed the result of every sentence appearing more significant. That particular phenomena seems to accrue with practice. I would like to try a martial arts course someday; not feasible at the moment. Living in a (relatively) older biological unit, I may go with something slower like Tai Chi or Qi Gong rather than Karate or Judo.

The day this posted, my ex sent out a photo of a plaque commending her brother for a high martial arts honor of some kind. The photo was four years old, more of synch that she chose to send it out now.