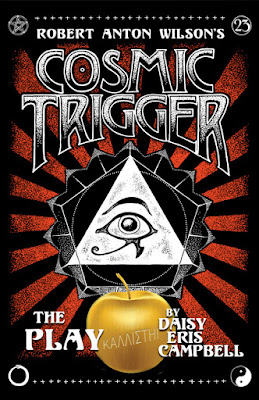 As I get older -- I'm 64 now, look at that, the same age as the Beatles song -- I simultaneously feel closer to figuring it all out, and to feeling like I am more confused than ever.

So I'm not sure how much stock you can put in my opinions. But I'm about as sure as one could be about such things that Robert Anton Wilson would have been delighted with Cosmic Trigger the Play by Daisy Eris Campbell, published by Hilaritas Press, which as  many of you know is the publishing imprint of the Robert Anton Wilson Trust.

The book is the text of the play Daisy wrote and staged, adapting RAW's Cosmic Trigger. The play has been performed in the United Kingdom but not, at least so far, in the United States. So the book is the closest that many American RAW fans can get to finding out what it would have been like to see the play. Crucially, the book features color photos showing what many scenes in the play looked like. And it's also helpful, if you still haven't seen it, to watch the recent video of the "RAW Power" showed hosted by Michelle Olley, which featured material from the play, including scenes of Oliver Senton playing Robert Anton Wilson and Kate Alderton as Arlen Riley, Wilson's wife. (Senton has naturally gotten a lot of attention for the role and he's recorded two audiobooks of the first and second Cosmic Triggers, but Alderton also is really good.)

The play does adapt the story of Cosmic Trigger, with Wilson meeting Leary and running his magickal experiments, as all the time he passes through Chapel Perilous and moves toward the worst crisis of his life, the murder of his daughter, Luna. Seeing Wilson through Daisy's eyes made me think about whether I have been going through an initiation, and what Wilson's ideas mean to me. Daisy makes modest changes in events and facts (she apologizes in the text of the play for any "Irish facts" that might offend RAW experts) but as adaptations go it's pretty accurate.

That description, however, does not really get across Daisy's gift for coming up with scenes that are surrealistic and magickal. One scene uses "typewriter letter-cushions distributed on one bank of the four-sided audience to create a surreal typewriter."

And appropriately for an adaptation of Wilson, Daisy has fun playing with the boundary between fact and fiction. At one point, Daisy appears in the play, portrayed by the play's stage manager, and then another character enters, "Real Daisy," played by Daisy.

The play also is funny in many ways. The play shows Wilson and Shea flying to London to see a stage performance of the Illuminatus! adaptation by Ken Campbell, Daisy's father. When they arrive on the set, they are met by an actor, who according to the stage directions is "naked and covered in blood." The actor exclaims, "Mr. Wilson? Mr. Shea? This is the greatest honour. Your book has completely changed my life." Shea replies, "So I see."

And as if to underscore that this is Cosmic Trigger viewed through the prism of Daisy's reality tunnel, her dialogues of Americans in the United States features plenty of British slang. Did everyone in the British audience realize that few Americans would use the expression "tits up," or that it is unlikely Arlen would ask her husband to "keep an ear out"? [UPDATE: Daisy informs me Alan Watts did use the expression "tits up." We'll keep an ear out for any other mistakes in this review.]

Few Wilson fans will feel unmoved if they take the time to read this book, exploring a key moment of Wilson's life.

The book also features an introduction by the writer Ben Graham, which usefully explains how Daisy's play helped spawn an ongoing Discordian counterculture in Britain and revive interest in Wilson. The introduction even has a drawing by Graham, a "Mycelium Mind Map" with lines showing connections between various esoteric interests and personalities. Many connections lead to John Higgs, on the map as in "real life."