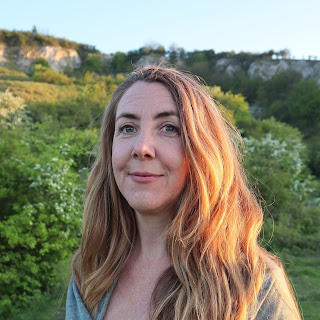 I enjoyed all of the recent Journey to Nutopia "RAW Power" show (available as an on-demand video), but the highlight for me were the scenes from Daisy Campbell's Cosmic Trigger play, particularly the bits featuring Oliver Senton as Robert Anton Wilson and Kate Alderton as Arlen Riley. Watching those scenes are useful are background for reading Daisy Eris Campbell's Cosmic Trigger the Play book, which I recommended the other day.

But as I thought about that performance, I wondered how Kate Alderton prepared for the role. Oliver Senton obviously had many hours of video and audio of Robert Anton Wilson to study, but the situation hardly was the same for his co-star. I asked Kate Alderton about this, and she kindly replied:

"It was a real joy to return to Bob and Arlen for the Nutopia RAW night – I’ve missed them!

"Preparing for Arlen was a curious challenge: there’s so much stuff out there about Bob, and  I read and re-read everything he wrote about her, but there was so little on the net.

"At the time, I found one or two photos of her in her 60’s (there are a few more now I think!), her poetry, the David Jay Brown interview and the Gonzo Sociology tapes.

"It felt so rare to find someone whose presence is that quiet in the sea of digital content we swim in every day. Every piece of the puzzle I found felt like a real jewel. I listened a lot to the Gonzo tapes to get a sense of her. Daisy wrote Arlen with such a grounded warmth and humour, and with such depth of relationship between her and Bob- it felt easy to lean into that.

"I’m not sure if anyone who actually knew Arlen saw the live production. The Nutopia night was the first time lots of you folks across the pond were with us. That’s also the first time I’ve performed Arlen’s poetry - which I love - and I was so grateful to Christina for her words on the night."

You can read Kate Alderton's biography (she's been in quite a few TV shows, movies and stage plays) and follow her on Twitter.