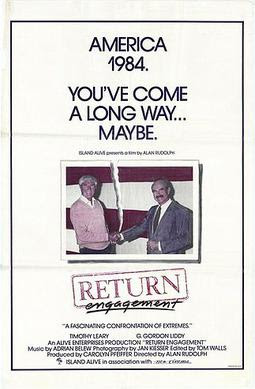 G. Gordon Liddy has died. The New York Times has a full obituary on Liddy, who by turns was intelligent, weird and evil.
While Liddy remains best known for his adventures as a Watergate burglar, he also has a connection to Timothy Leary, as the obituary mentions; as a local prosecutor, he participated in a raid at the estate in Millbrook, N.Y., where Leary operated in the 1960s, And later, Leary and Liddy had a college lecture circuit act in which they debated. The Times says the debates were edited into a film, "Return Engagement." Portions of it seem to be on YouTube, but I haven't found the full movie. I did find a recording of one of the debates.
Update: It's apparently available here.
Update 2: Jesse Walker has posted a link on Twitter to the documentary on YouTube. It starts about 26 seconds in.
on March 31, 2021

In more recent years Liddy was a hard-right “libertarian,” telling us to be ready to shoot any jackbooted stormtroopers who tried to invade our houses. Avedon Carol noted that he was lucky Leary didn’t believe that.