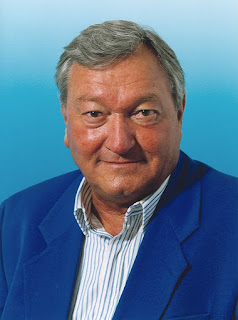 "As a teenager I watched a BBC documentary on Erich von Däniken (The Case of the Ancient Astronauts, 19771) which stuck in my memory because it seemed such a ruthless, albeit polite (British-style), 'demolition job'. I hadn’t read anything by the prolific Swiss author of Chariots of the Gods, but I was quite interested, as a 15-yr-old, in UFOs, 'strange phenomena', etc…

"That was years before I read The New Inquisition by Robert Anton Wilson, and who knows if the BBC programme really “was” overly harsh or dogmatic – it just seemed that way at the time, as if not just highlighting errors in von Däniken’s thesis, but crushing the whole suggestion of extraterrestrial visitation as synonymous with gullibility and con-artistry."

I remember watching a TV show as a teenager that was sympathetic to van Daniken and I had no trouble recognizing some of Daniken's suggestions as a misuse of much of his supposed evidence, although of course I was interested in the idea of aliens "out there" and recognized that first contact stories were a staple of science fiction.

This tension, between avoiding UFO gullibility and remaining open to the possibility of first contact (this free NASA ebook, Archaeology, Anthropology, and Interstellar Communication,  is one I can recommend personally) is something that persists to the present day. (At one of my favorite blogs, Marginal Revolution, it's clear that Tyler Cowen takes recent UFO reports seriously, while co-blogger Alex Tabarrok does not).

There is a parallel tension, too, as Brian's title suggests, between listening closely to smart teachers, such as RAW, and turning the teacher into a guru figure, behavior which degrades both the teacher and the student.

Not that I'd tell Brian how to spend his time, but his blog post seems like the seed of an entire book.

Von Daniken was so inept that Colin Wilson saw through him.