Did an ardent RAW fan create Bitcoin? Maybe, maybe not 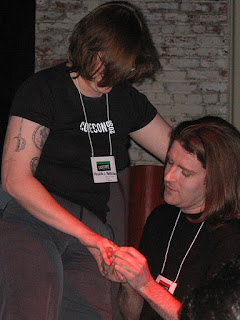 For years, people have been trying to figure out the real identity of Satoshi Nakamoto, the creator of Bitcoin. Many candidates have been suggested.  When I went to see one of my favorite writers, Neal Stephenson, in Pittsburgh in 2019, he denied the suggestion in a recent article that claimed he is Nakamoto.

The latest nomination is that Bitcoin was created by Len Sassaman, a brilliant computer software engineer who helped develop Internet protocols and was active in the cypherpunk movement and cryptography. Sassaman also suffered from depression and was only 31 when he died in 2011 in Belgium, a suicide.

I followed news about it at the time, because I very slightly knew his wife, Meredith Patterson, in the sense that both of us served on a committee in the Libertarian Futurist Society (the Prometheus Award folks); I was following her on Twitter when her husband died, and I noted at the time in this blog that Robert Anton Wilson was Sassaman's favorite author.

Now there is a new article by Evan h on Medium, "Len Sassaman and Satoshi: a Cypherpunk History," which assembles quite a bit of evidence to argue that Sassaman was Satoshi Nakamoto. It's a really interesting article if you want to take a little time to read it.  Here is a little bit of it:

"To synthesize and implement the myriad ideas Bitcoin was based on, that person or group of people would have required a unique combination of expertise spanning public key infrastructure, academic cryptography, P2P network design, practical security architecture, and privacy technology. They would likely have been deeply engrained in the Cypherpunk community and adjacent to the figures who proved to be major influences on cryptocurrency. Finally, they would have needed the ideological conviction and hacker ethos to ‘roll up their sleeves’ and anonymously build a real-world version of ideas that had previously been relegated to the realm of theory.

"When I consider Len’s life, I see many of these same traits and I think there is a real possibility that Len was a direct contributor to Bitcoin."

It certainly is an odd coincidence that Nakamoto apparently disappeared about the time that Sassaman died. And that both had a habit of using British English words such as "flat" and "bloody" and "maths." (Sassaman was an American from Pennsylvania.)

On Twitter, Meredith Patterson responded, "It's a very well-researched and respectful article, but to the best of my knowledge, Len was not Satoshi. Worth reading for the history and the conclusions about mental health, though." She linked to the article, and also linked to a Hacker News discussion about it.

BitTorrent creator Bram Cohen, who was close to Sassaman, responded to the piece with an intriguing thread on Twitter.

The Evan h article also mentions Ryan Lackey, an entrepreneur and computer security professional.  I know Ryan just a little bit, because we both are currently active in the Libertarian Futurist Society, so I asked Ryan if he wanted to comment on the piece. He wrote back, "Len was certainly part of the broader cypherpunk movement which facilitated or inspired the creation of bitcoin, but I don't think there's much chance Len was directly involved.  He was pro privacy (like me) and thus was against the privacy-compromising nature of bitcoin. There were superior alternatives at the time (chaumian blinded tokens, run on separate servers, and market baskets of currencies) which he would probably have supported instead."

Ryan by the way is credited as one of the co-founders of HavenCo, the world's first data haven. One of my favorite novels, Neal Stephenson's Cryptonomicon, features a data haven. It is the book I asked Stephenson to sign in Pittsburgh, at the event where I saw Stephenson deny he is Satoshi Nakamoto. (When I nominated Cryptonomicon for the Prometheus Hall of Fame award, Meredith Patterson seconded the nomination.) All of this stuff connects somehow, and people like Ryan Lackey and Meredith Patterson are characters in the big cyberpunk novel that is modern life, while the rest of us appear as bit characters or lurk in the margins of the text.