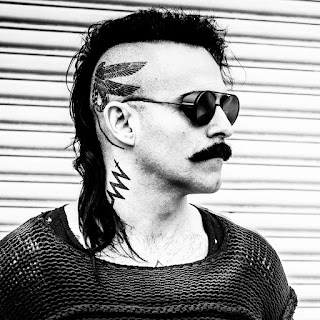 Alex Mincolla (Facebook profile photo)
An announcement on Twitter Monday from Alex Mincolla, who signs for the industrial heavy metal band 3Teeth:
"I'm excited to announce I recently collaborated with the publishing house of the Robert Anton Wilson Trust and my writing will be featured in the re-release of one RAW's works. Stay tuned for info at http://hilaritaspress.com."
No other information is available; logically, the next title Mincolla could contribute to would be the planned Hilaritas Press edition of Sex, Drugs and Magick: A Journey Beyond Limits, the next title listed for imminent publication by Hilaritas. I expect an announcement about the book very shortly.
I don't know anything about 3Teeth. These sentences from the Wikipedia article seem interesting:
The band took the name 3teeth from the concepts of Odontomancy, which Mincolla described as an ancient form of divination where "the seer would read prophecies in the teeth like rune stones" as well as the word trident, which comes from Latin for "three teeth." Mincolla said of the trident: "...this divine weapon of God that brings destruction. It's what Marduk killed Tiamat with -- this caught thunderbolt or trident."
on March 17, 2021