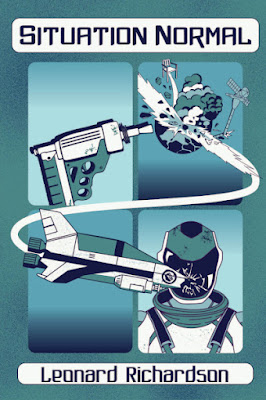 Eleven novels have been nominated for the Prometheus Award this year and I have been reading them. I am on the nominating committee for the award; a list of five or so finalists will be announced in the next few weeks.

I  can't discuss the nominating committee's deliberations, but many of this year's titles would be of general interest to science fiction fans, so I want to point you to a few titles.

I particularly liked Leonard Richardson's offbeat space opera, Situation Normal, about humans and aliens who are caught up in a war between two opposing powers. Richardson has not penned the usual good vs. evil space opera war novel, but instead concentrates on showing that war is evil, and that it's not likely that either side in a war will be blameless. (The title comes from the phrase "Situation Normal, All Fucked Up" also referenced in Illuminatus! When the characters in Richardson's book are in a particularly bad place, they say they are in a situation normal.)

There's an interview with Robert Anton Wilson in Cosmic Trigger 2 where RAW describes his literary aesthetic, and I was struck how it also describes what is going on in Situation Normal:

My novels look like melodramas part of the time and then switch over and look like black comedies, but isn't that true of politics also? If you believe somebody's war propaganda, the world is pure melodrama -- the good guys versus the bad guys. If you start doubting all propaganda, the world becomes black comedy -- "a darkling plain/swept by confused alarms of struggle and flight/where ignorant armies clash by night," i.e. a more violent and ugly version of Three Stooges. I can't see things from every possible perspective, but I try to see them from enough kinky new angles that my books never degenerate into war propaganda for any of the ignorant armies that go on clashing by night.

Situation Normal full of funny and unusual touches; one spaceship, commanded by an alien, is called Brown v. Board of Education of Topeka (because spaceships in the human-dominated alliance are named after important documents in human history.)  Another spaceship is given various  names depending on which character is speaking -- it is called in different places  the Sour Candy and the Sweet and Sour -- because the name is in an alien language, and there are different translations! This is not your usual you've-read-it-before space opera.

I've been waiting for years for another novel from Richardson, because I liked his Constellation Games so well.

Here are some other books worth reading, from the list of books nominated for the Prometheus Award this year:

Network Effect: A Murderbot Novel – The Murderbot Diaries Book 5, by Martha Well. It may be book five of a series, but it's the first full-length novel; the others were novellas. A really good book, I'll be quite surprised if it's not a Hugo finalist this year. It's about a machine designed to provide security that becomes a person. I love the whole series.

Attack Surface, by Cory Doctorow. The latest in the series that began with Little Brother, although this one, unlike the other two in the series, is aimed at adults rather than being a young adult work.

The War Whisperer, Book 5: The Hook,  by Barry B. Longyear. Barry Longyear was a once-famous SF writer; he is self publishing a new series that has gotten little attention. This one is a hardcore libertarian novel, for readers who are libertarians or at least open to exploring the political philosophy.