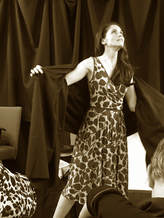 [I have to work tomorrow, but some of you may be able to catch this. Announcement from the Consulate General of Ireland in Boston. Registration here.  Online performance  3 p.m. Thursday, March 11, U.S. Eastern Time. The Management.]

Join The Here Comes Everybody Players for an hour of humor, wordplay, mythology and history laced with music and some of the stories and themes of James Joyce’s most ambitious novel, including:

- The pirate queen, Grace O’Malley (aka The Prankquean) and her adventures at Howth Castle

- St. Patrick’s conflict with the Druids of Ireland - as we approach his feast day

- two of the famous 100-letter “thunderwords”

Some of the mysteries of the book will be introduced by Finnegans Wake scholar, Katherine O’Callaghan of U. Mass, Amherst. For those who have some familiarity with Finnegans Wake, the fun will be to hear some great sections in full voice. For those who've never been exposed to Joyce’s most radical and complex work, it should prove enjoyable and revelatory.

Arranged and adapted by Donal O’Sullivan and Cathal Stephens, with literary advice from Katherine O’Callaghan