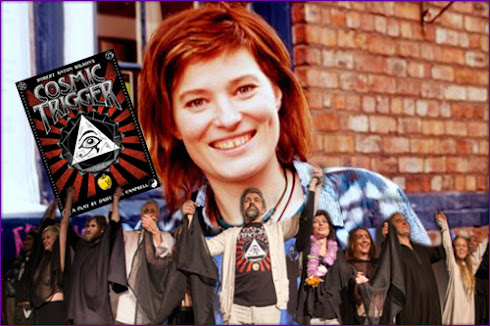 The Feeling Bookist podcast is a literary podcast that features Roman Tsivkin and Robert Fay. Tsivkin is a big Robert Anton Wilson fan, and he takes the lead in the lastest episode, which features an interview with Daisy Eris Campbell, the British playwright, director and actor and the daughter of Ken Campbell.

Topics covered include Daisy's Cosmic Trigger play book (just published by Hilaritas Press, with an introduction by Ben Graham), a lot of great stories about Ken Campbell (adapting Macbeth* into Pidgin English?!) and Daisy's optimistic observation that if things can go wrong, if they can go "tits up," then maybe they go "tits down," too.

Daisy shares her philosophy of art: "That's when you don't know what the fuck you're doing, you just proceed as if everything is a sign from the universe.  I've been operating off that principle for about the last four years....you definitely get into some interesting scrapes."  And she and Roman talk about a book I was not familiar with, Flicker by Theodore Roszak, which Ken Campbell had intended to adapt for the stage. (Roman says it's great and we should all read it.)

The podcast is just over an hour long. It's available at Soundcloud but also the usual other podcasting apps.

Daisy is also the author of Pigspurt's Daughter.

UPDATE: A formal announcement by Hilaritas on publication of Daisy's new book should be imminent.

* My wife and I got married at Glenlaurel, a "Scottish Inn and Cottages," located in Ohio as you might guess, and we spent our first night as a married couple in the "MacBeth Croft," which I thought was hilarious.

FLICKER is really good. My one petty complaint about it is that Roszak does all this careful research on film history...and then has MTV existing in 1975. (I think he was using "MTV" to mean "music videos," but that's still sloppy, since no one was using it that way then.)