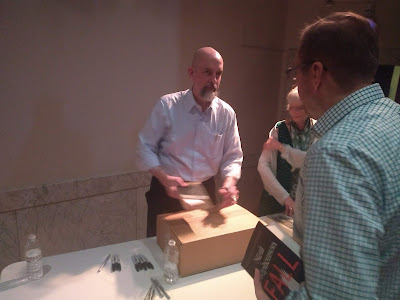 Neal Stephenson autographing books for fans in Pittsburgh on June 17.

I've never had a chance to meet or listen to Neal Stephenson, one of my favorite writers. So when I discovered he was speaking at the Carnegie Library Lecture Hall in Pittsburgh on June 17, I bought a ticket and made the drive, a little more than two hours.

Stephenson apparently does not like to correspond with fans or give lots of interviews, but when one of his book is released, he dutifully does a publicity tour. He never comes to Cleveland for these, so the Pittsburgh gig was my one chance. (He's promoting his new novel Fall, Or Dodge in Hell. A presigned copy of the book was included in the price of my ticket.)

I was determined to get my one question in, so I kept raising my hand until I got possession of the wireless microphone, and I coaxed one of Stephenson's longest answers.

When it was my turn, I noted that I was a big fan of Cryptonomicon, and that I had noticed that the novels he wrote next, the Baroque Cycle, had characters who were the ancestors of the Cryptonomicon characters. I asked how it came about that he had done this, and if he had been inspired by any other writers.

Of course, I had an agenda. Perhaps in the universe next door, he would have answered that he was inspired by Robert Anton Wilson's Historical Illuminatus novels, which have characters who are the ancestors of the characters in the Illuminatus! trilogy.

But Stephenson said he did not have any antecedents, at least consciously. He explained that when he was writing Cryptonomicon, which is largely about money and computers, he got an email from one friend mentioning that Isaac Newton had been in charge of the British mint, and an email from another friend about how Leibniz had conceived of certain concepts related to cybernetics. And the two hated each other. So Stephenson decided to write fiction that had the two historical characters, and planted items in the final drafts of Cryptonomicon that reached back to the planned Baroque Cycle novels

One of his answers had a synchronicity for me. As I drove from Cleveland to Pittsburgh, I listened to an audiobook for the latest Daniel Suarez novel, Delta-v.

A woman in the audience wanted to know what science fiction and fantasy Stephenson had read lately that he recommends, and the first book Stephenson mentioned was Delta-v. He also recommended  Crooked by Austin Grossman (an alternate future in which Richard Nixon battles Lovecraftian occult forces) and author Matt Ruff.

Oh, and he denies that he is Satoshi Nakamoto, the guy who invented Bitcoin, as a mischievous article at Reason magazine recently claimed. Stephenson says he owns one Bitcoin, given to him by a fan.

I was curious what the audience would be like. I recently went to an appearance in Cleveland for novelist Celeste Ng, author of Little Fires Everywhere, and noticed that audience was almost all women. Stephenson's audience had a strong majority of men, many of them the sorts of folks you'd see in a science fiction convention, but there were also women in the crowd.

Stephenson's appearance was timed so that it lasted for an hour, from 7 p.m. to 8 p.m. This was apparently done so that all of the Neal Stephenson fanatics (such as me) could line up afterward for a long autographing session.

The way these things work is that while you are standing in line, a person asks who you want your book (or books) autographed for. When you say "Tom," she writes the name down on a post-it note when goes on the title page of Cryptonomicon, or whatever. This speeds things up when you get to the author.

I only had a few seconds to speak to him. I wanted to give him my business card and ask for an interview (I'm a newspaper reporter), but I decided that would likely be unpleasant for him. I also decided not to give him the Discordian Pope card I found when I was rooting around in my wallet. (Here is the "Physical Objects" section of the "Contact" page of his official website: "Do not under any circumstances try to send me physical objects (letters, bookplates, books--anything whatsoever made of atoms) in the mail. It is unlikely that you are sending them to the right address--the Internet is often wrong--and if they do reach me I will throw them away. See "Why I Am a Bad Correspondent" and "Why I Am a Sociomediapath" for background.")

So I simply mentioned that I had driven from Cleveland to see him and told him one of the books was for a friend who had a birthday that day, and he scribbled "Happy Birthday" on one of the books in magic marker and thanked me for coming.