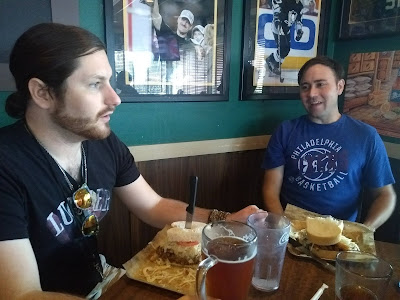 Apuleius Charlton gave a talk at Confluence on Robert Anton Wilson and magick, and now you can listen to an MP3 file of his presentation. (Sorry about the bad link -- it's fixed now).

Apuleius  has a strong interest in magick in the Aleister Crowley tradition and also influenced by figures such as Wilson and Alan Moore. He is currently a student at West Virginia University. He led this blog's online reading group discussion of the Hilaritas Press edition of Email to the Universe and has served as a volunteer copyeditor for Hilaritas.

About the talk, Apuleius says, ""I would like to note that many of the ideas in this talk are derived directly from points made by Alan and Steve Moore (no relation) as well as Robert Anton Wilson, naturally, in their interviews and published works. I merely synthesized their ideas and have had some experiences inspired by their lives."

Tom, is the link right? It takes me to the Sandusky Register...

My bad. Fixed now. I was actually away from the computer for awhile -- my wife and I were celebrating our wedding anniversary -- and I could not fix it right away.

Really nice podcast, Greg! A couple notes:
Sufi's do have a heart chakra concept. I have a Kashmiri friend who grew up a Sufi, and he explained that Kashmiri Sufi's drew a lot from Hindu philosophy, and I was delighted to learn my favorite Hindu deity, Shiva, is especially revered. There's a "charas" connection there, as well, that I found particularly appealing.

Also, I totally agree that "Love is the law, love under will" is often a "forgotten" part of the formula. I know some conservative Thelemites who love to cite, "Do what thou wilt shall be the whole of the Law" without the second part, without mention of that vital element that Bob knew was so important.

Oh shit! I had no idea. I just assumed that Sufism as it is discussed in Cosmic Trigger was influenced by the fast and loose rules of New Age labels. Of course there would be cross pollination between Sufism and some parts of Hinduism! I can't believe I overlooked that possibility for as long as I've puzzled over the specific exercise. I should have noted in the talk I am not a scholar of Sufism by any means and it is by far the biggest blind spot as far as the main esoteric religions go. Other than a little Idries Shah, Attar, and Hafiz I have few touchstones. I think Shiva or his son would be my favorite male deity in the Hindu pantheon but I revere Durga the most.

Be in Love, Be Mysterious.

I believe that should be West Virginia University that was attended.