A bit on 'Prometheus Rising' 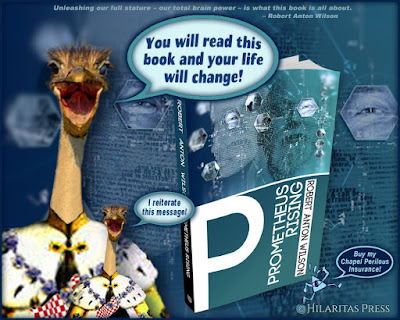 On Facebook, Rasa published the above meme and offers the following text:

RAW's original sub-title for Prometheus Rising was going to be "How to use the human brain for fun and profit." I see the book as a crucial navigational tool.
~ ~ ~

RAW: The Berkeley mob once called Leary and me “the counter-culture of the counter-culture.” I’m some kind of antibody in the New Age movement. My function is to raise the possibility, “Hey, you know, some of this stuff might be bullshit.”

JW: You don’t seem to take very much of it very seriously.

RAW: Some of it I do take seriously. In Prometheus Rising and Quantum Psychology I’m definitely trying to teach the reader how to change their own consciousness so they don’t need a guru to do it for them. I’m very definitely a spiritual anarchist.