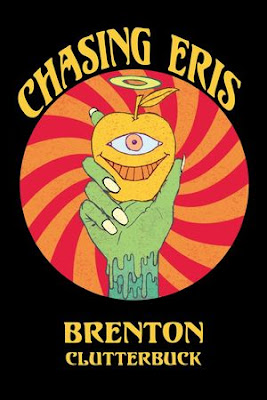 Brenton Clutterbuck, author of Chasing Eris, has released a free new mini ebook, United We Fnord: More Discordian Stories from the UK and Ireland that's a supplement to Chasing Eris. It won't be around forever.  Brenton explains,

When Cat Vincent was kind enough to write a review for my book Chasing Eris, he said one thing that stood out to me; my UK chapters focussed on history and were notably lacking in the kind of in-depth description of the people and scenes that are the lifeblood of other chapters.

While it was very neat to wrap up some of the more historical elements of Discordianism in quick succession by following the KLF from England to Scotland, and dealing with Robert Anton Wilson just outside of the UK, in Ireland, I always felt a little bad for not including more of the more personal interviews I completed while in the United Kingdom. So, here’s a short collection of the UK stories published previously in blogs, magazines or not at all.

More news: Chasing Eris has become more widely available. Originally only offered through Lulu.com in a paper edition and also as an ebook (ePub format), it's also now available from Barnes and Noble, from Apple iTunes and from Amazon (but no Kindle, and not if you live in the U.S.). There's also a Barnes and Noble ebook.

I got my shit together to get a Kindle version going. https://www.amazon.com/dp/B07GLXYGH1

Actually I had no idea that the Amazon version was Australia only. I will see if I can fix that up.