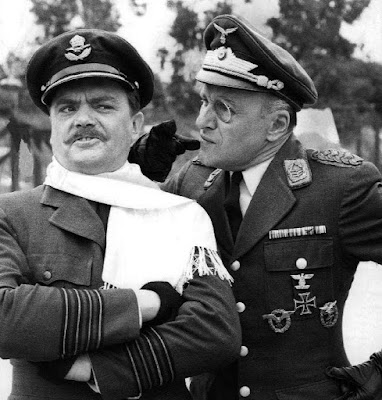 Some of my older readers will likely remember the TV show "Hogan's Heroes," a comedy set in a prisoner of war camp during World War II. The camp's commander was played by Werner Klemperer, a native of Germany who despised the Nazis and was happy to play the German officer as an idiot. Klemperer won Emmy awards twice. His father, BTW, was the famous orchestra conductor Otto Klemperer.

Yesterday, after I posted my Prop Anon interview, Jesse Walker listened and noticed that Prop mentioned that RAW's sister-in-law was actress Janet Riley. I hadn't gotten around to looking up Janet Riley, but Jesse was on the case and announced his results on Twitter:


Today I learned that Robert Anton Wilson's sister-in-law was briefly married to Werner Klemperer, who would later play Colonel Klink. I do not know what to do with this information so I am releasing it into the wild.

Addendum: Here is a link to the Billboard announcement Jesse mentions in the comments.

And here is an announcement of their marriage in Billboard: