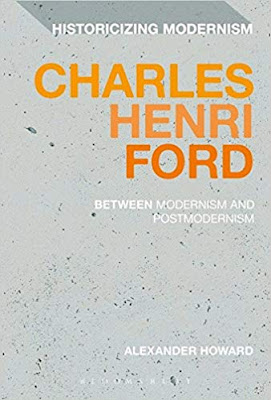 Over the years, literary tastes tend to shift. This was brought home to me a few weeks ago when I was hanging out with Bobby Campbell and Gregory Arnott at Confluence in Pittsburgh, and Gregory remarked that he expects interest in Ezra Pound to fade in university English departments. Pound's interest in fascism just doesn't play well, Gregory explained.

I've been reading a new book about an obscure modernist-surrealist poet, Charles Henri Ford (1908-2002) who I've long been interested in. (The book is Charles Henri Ford: Between Modernism and Postmodernism (Historicizing Modernism) by Alexander Howard, and so far, I think Howard is doing a great job.)

I've noticed that although Ford has never had a big following, the way he is "marketed" by the people who are interested has changed. He used to be billed as America's first surrealist poet. Nowadays, the focus tends to be more on The Young and Evil, an experimental novel originally published in 1933 in collaboration with Parker Tyler which depicts gay life in New York City, and on Ford's early role in publishing queer literary works. This fits, I guess, with the general tendency now to give more space to marginalized groups.

So the question I would pose is this: Are there any current trends that could be used to promote renewed interest in Robert Anton Wilson and/or Robert Shea?

Beats me. It surprises me how Lovecraft and Phil Dick have jumped in popularity and reputation while Heinlein and Clarke have dropped.