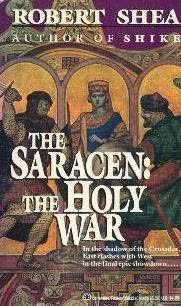 The two novels, Saracen: Land of the Infidel and Saracen: The Holy War, are really one work The first Saracen book ends with an exciting scene while setting the reader up for the second book, which ends with a big battle scene. The books offer a very vivid picture of medieval Italy.

As I mentioned in an earlier posting, the Saracen books feature a sympathetic character, Lorenzo Celino, whose name is similar enough to Hagbard Celine's to suggest a possible link. At the end of the second Saracen book, the reader learns that Celino is related to Roland, the troubadour hero of All Things Are Light.

Both Saracen books are available as free downloads from the Robert Shea section of Project Gutenberg.  For more free Shea ebooks, see this posting.
on August 16, 2018