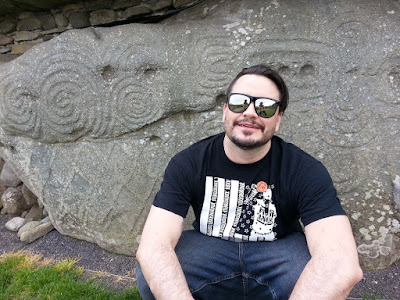 No, I haven't been offered an advance look at the book. But R.U. Sirius has just done a new interview with Prop Anon (aka Gabriel Kennedy), author of the forthcoming Chapel Perilous: The Life and Thought Crimes of Robert Anton Wilson,  and it's very good, full of new information about Robert Anton Wilson's life and suggesting that the new book will be accurate and fair, and won't shy away from touchy subjects such as Wilson's attitudes toward feminism.

I also could not find any mistakes in Prop's statements, a good sign. Prop doesn't strike me as a libertarian, but his discussion of Wilson's libertarian beliefs, and how Wilson differed from more conventional libertarians, is quite good.

Here's a bit, about Wilson and Robert Shea: "Wilson and Shea became fast friends at Playboy. They would hang out together at the bar on payday. They, and their wives, would all hang out, smoke weed, watch TV or listen to records and think of funny sketches that made each other laugh. They had a lot in common: Both raised Irish Catholic, both left the Church young, both seeking to become full time free-lance writers. They both really dug into the Anarchist perspective."

Also,  here is a Mondo article about a punk rock documentary Prop appears in.