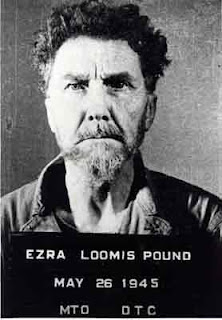 Mug shot of Ezra Pound, when he went into captivity in 1945.

Supergee reviews a new book about Ezra Pound, The Bughouse by Daniel Swift.

"Some critics I respect (Hugh Kenner, Robert Anton Wilson) love him; others (Christopher Hitchens, Clive James) do not; and the latest book about him—The Bughouse, by David Swift—suggests an explanation. Swift says that bad poetry is hard to write about, and there is much of that in Pound, but the good parts are good enough to keep the critics busy," Supergee observes. "As the title suggests, The Bughouse deals with Pound’s years in St. Elizabeths Hospital (which is now headquarters for Homeland Security; you can’t make these things up) after World War II."

The conclusion? "If you are interested in Pound, this is a part of the story well worth reading."

Thanks for passing it along.