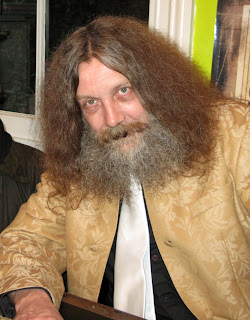 As work continues on the new edition of Coincidance: A Head Test that will be put out soon by Hilaritas Press, Richard Rasa has given me permission to share a bit of news: The new edition will feature a new introduction by Alan Moore. This continues the Hilaritas Press tradition of adding new material as it puts out definitive new editions of Robert Anton Wilson's work.

The people involved with the production of Coincidance have mostly kept quiet about this, although Moore himself let the feline slip out the bag in a recent interview.

Rasa said I could quote this bit from Moore's introduction:

This, for my money, is the most spectacular non-fiction work that Wilson ever penned, breathtakingly adventurous in both its content and its strikingly experimental form. Uncertain and demonstrably uncaring whether it’s a piece of literary criticism, metaphysical discussion or anthology of diverse esoteric writings, this remarkable compendium is best seen, in the spirit of its title, as a glorious accidental dance of meaning, modernism and mythology.

No publication date has been announced for the new edition. I do know that work has advanced pretty far with copyediting and formatting and that Scott McPherson again will do the cover.

I can't wait to read the introduction.